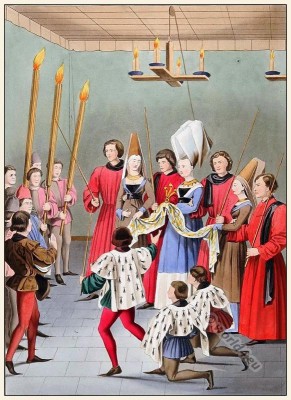 The Lady of the Tournament

The Lady of Tournament delivering the Price. 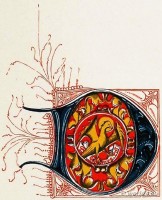 DURING the progress of the Tournament, the scaffolds surrounding the field were crowded with ladies, who encouraged the combatants by their smiles. They not unfrequently gave to some favoured knight a glove or a handkerchief, which he was to defend against the field. To a lady also was reserved the office of delivering the prize to the victor in the Tournament each day. Our engraving representing this ceremony, forms the last of the series of drawings by King Rene. In the Traite des Tournois, we have especial directions relating to this part of the day’s amusement. When the “jugesdiseurs,” or umpires, had given their judgment, the king of arms announced it to the Knight who had been decided the victor in the day’s contest, and, attended by the heralds and poursuivants, conducted him to the Lady of the Tournament.

The lady was attended by two damsels of her own choice, and she carried the prize carefully covered. When the victor in the tournament was brought into her presence, she uncovered it and delivered it to him, and he received it graciously and kissed the giver; and this was not all, for he was allowed “to kiss her two damsels likewise, if it were his pleasure” (et semblablement les deux demoiselles se s’est son plaisir). Then the king of arms, heralds, and poursuivants cried aloud in the hall that the prize of the day had been adjudged and delivered. After this, the knight led the Lady to the dance as his partner and the judges, knights of honour, king of arms, and poursuivents, conducted the two damsels with all ceremony back to their places. The rest of the day was spent in joyous festivities.

The cut at the bottom of the preceding page is taken from a contemporary picture of Marie Duchess of Burgundy, daughter of Charles the Bold, and married in 1477 to Maximilian of Austria. At this time she was only in her twentieth year, an orphan, and engaged in a cruel war with the king of France, who had forcibly deprived her of a portion of her heritage. The life of this innocent princess was a constant series of sorrows and misfortunes.

In her youth she was persecuted by strangers, and rudely treated by her own subjects, who took advantage of her weakness. A short life filled with troubles was ended by a violent death. At the beginning of February, 1482, when she was still only twenty-five years of age, she went a hawking. While engaged in this recreation, her horse made an effort to leap over a large trunk of a tree, which lay on the ground, in doing which the girths broke, and, the saddle turning round, the duchess was thrown with considerable force against the trunk. She was carried home severely wounded, but no fears were entertained for her life. It is said, however, that from feelings of modesty she would not allow the physicians to take proper care of her wounds, which became worse and worse, till, after languishing three weeks, she died. 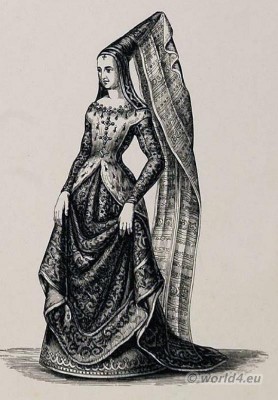 Our initial letter is one of the series of the four Evangelists, from an early printed book, of which the other letters are also given in the present work .

Source: Dresses and Decorations of the Middle Ages from the seventh to the seventeenth centuries by Henry Shaw F.S.A. Published: London William Pickering 1843.