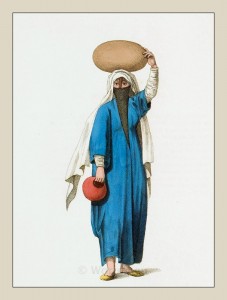 THE varieties of female dress in most of the eastern nations can never be distinguished, when they are in the streets, both from their veils and the long cloaks, in which they are concealed. At Cairo they conceal the head and part of the body by a large black veil; and those, who can afford rich habits, are always covered with a large wrapper. The veil, which is always the first concern with the women, for it is the very last part of their dress they would part with, is formed of a long triangular piece of linen cloth fitted to the head, and falling down before, so as to cover all the face, except the eyes. At Cairo this is always black, and very huge. All the oriental women wear drawers, and the poorer sort in Egypt wear little else but these drawers, and a long blue shirt.