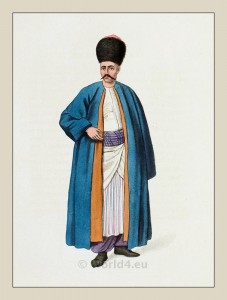 THE Turks are not the only nation who live at Constantinople. Its inhabitants consist also of Greeks, Jews, and Armenians, and hence there results a great variety in manners, language, and religion. The Armenians form about one twelfth part of the population. They reside both in the interior of the city and in the suburbs, particularly in Pera. They are almost all merchants, and some of them to an immense extent, and possess warehouses and correspondents in almost every part of Asia. Their manners are in general very correct, and their engagements may be depended upon, al though they are esteemed avaricious. The Armenian is, very exact in the performance of every thing relative to religion; and this body of men may be esteemed as containing some of the most useful subjects of the Ottoman empire. These are now almost the only remains of that once powerful and flourishing nation, so noted for the wealth and luxury of its monarchs. The country of Armenia itself no longer retains any vestiges of its former splendour; and the inhabitants, under the pressure of a foreign yoke, are forced to fly far from their native homes, to escape a tyranny they have labored under for more than three hundered years.

Note:  The Door of Felicity. The Harem of the Sultan's private apartments.