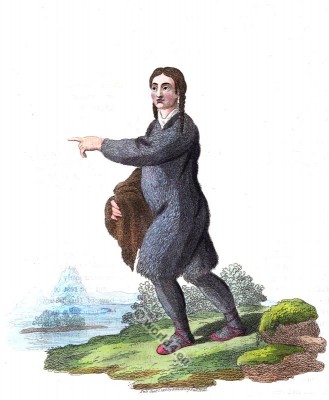 THE Tschutzki are a people strongly resembling the wandering Koriaks. They dress in the same manner, speak the same language, spring from the same stock, and have nearly the same manners and customs; but they are even more ferocious. They are the most cruel people of all Siberia. and the most difficult to govern, The Russians have not yet been able to subject them, and dare not even carry on a traffic with them. We have only a solitary instance of any negotiation between the two nations, and which supplies us, at the same time, with a sufficient proof of their mutual distrust. The Russians exposed their merchandize upon the shore and withdrew; the Tschutski then approached, took what suited them, and left in their place a number of fishes teeth. After this they retired; and the Russians came to take possession of what the Tschutski had left them.

Their flat and ugly countenances are rendered still more disgusting by the lines they trace out upon their cheek and forehead, and by the bones which they wear below the lips, and which project out like weapons of defence.
They are fond of a state of warfare, and carry it on with great fury. They have no chiefs; but they suffer themselves to be led to battle by the most courageous of their companions: they follow him without being subject to his orders, and abandon him at their pleasure.
Notwithstanding their ferocious disposition, they live together in great harmony, and all their different tribes are closely united to each other. They consider hospitality as a duty, and will kill a rein-deer for the purpose of regaling a stranger. If their wives are old, or their mistresses ugly, they go to the neighbouring villages in quest of others more agreeable to them.
Their country, which they call Cape Tschutski, and more commonly Cape Chelatskoi, forms an advanced point of the Frozen Sea, and the rest of its coasts are watered by the Eastern Ocean. The greater part of this nation dwell in huts constructed like those in Kamtschatka, but generally more extensive, and capable of receiving a greater number of families. For the purpose of’ hunting, fishing, and conducting the rein-deer into fresh pasturage, they often wander from their habitations in summer, and sometimes even during the winter. At the places where they stop, they erect dwellings similar to the balaganes of the Kamtschadales. Notwithstanding the exterior cold, their subterranean huts are so excessively warm, that the women are under the necessity of going entirely naked while in them.

Note:  Back of a Finland woman in holiday dress.