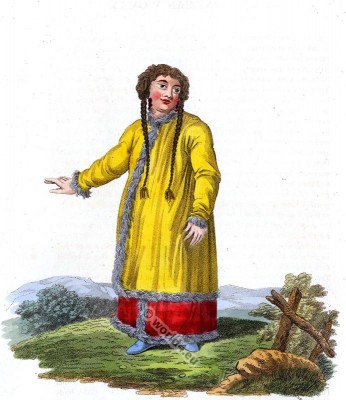 THE vast desert hemmed in by the Ob and the Irtisch, and extending as far as the Altai mountains, is called Barama; this word the Russians have corrupted into Baraba, and have given the appellation of Barabintzi to the in-habitants of this country. At the time of the conquest of Siberia, the Barabintzians were scattered over the same territory which they now possess. They have suffered too much from the restlessness and ferocity of their neighbours, for their population to be numerous; they have only a remembrance of their former miseries, and have even forgotten whether or no they were ever governed by sovereigns of their own nation. Successively oppressed by the Kirguishes and Zungarians, they at length enjoy a state of tranquillity under the protection of Russia: they pay a trifling tribute to that country, and in return for this tribute, it engages to defend them from the attacks of their enemies. It is easy to trace in their features a mixture of several nations. In general they resemble the Tartars; but their flat countenances, and their long ears, evidently prove, that many of them belong to the Mongols. The language of the Barabintzians is a dialect of the Tartar, and is a proof of their belonging principally to that people. It is corrupted, but less so than that of the Baschkirs.

Every village has its chief, and every district its Yaouta, or prince. The nation allows no revenue to these chiefs; and the only advantage they derive from their elevated situation, is the pleasure of being respected and obeyed. In their mode of living, the Barabintzians closely resemble the Baschkirs. The care of their herds is their principal occupation. They sow a little barley and oats, but the produce of their tillage is extremely feeble. Their desert, unproductive in game, rewards but scantily the fatigues of the chase; their flocks are more profitable to them; and many of their fishermen are indebted to the lakes of Baraba for their principal subsistence. Unskilful in drawing the bow, they are under the necessity of snaring their game, or of catching them by the assistance of their dogs. These animals are excellent hunters, and their masters esteem them so highly, that they will not exchange a good dog for a horse.
Every Barabintzian man or woman, young or old, smokes tobacco to excess: in order to increase the quantity, they mix with it the cuttings of the birch tree, and always carry their smoking utensils fastened to their girdle. The women are principally employed in preparing the skins of those birds which frequent the lakes; these skins they make up into pelisses, and sell them to strangers. They are very warm, very durable, and impenetrable to the wet.

Related Free Ebook: Historical researches on the wars and sports of the Mongols and Romans
in which elephants and wild beasts were employed or slain, and the remarkable local agreement of history with the remains of such animals found in Europe and Siberia … With a map and ten plates. By John Ranking