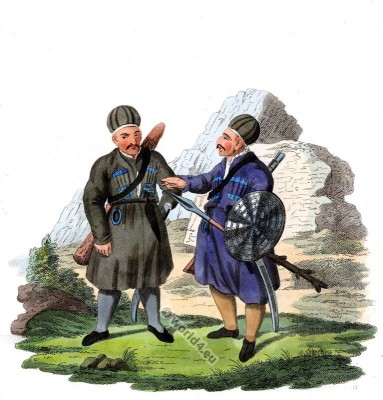 THE Ingushians (Republic of Ingushetia, North Caucasus)  are a tribe differing entirely from all the other inhabitants of the Caucasus, in language as well as in stature, and the features of their countenance: their national name is Lamur, which signifies `inhabitants of mountains;’ their nearest relations both of consanguinity and language are the Tshetschentzes, who are called by them Natshka. ” I had an opportunity,” says Professor Pallas, ” of seeing two deputies from this nation, in the Russian camp near the Baksan.

On account of the characteristic national features of their face, their stature, and armour, I caused an exact representation of them to be made, which my designer has executed in the most accurate manner.” From their manner of pronunciation, a person would imagine their mouths were full of pebbles. They are said to be an honest and brave set of people, maintaining their independence, and subject only to their elders, by whom their religious sacrifices are performed. They are almost the only nation inhabiting the Caucasus among whom the shield has been preserved as a part of their accoutrements. Their bucklers are made of wood, covered with leather, and bound with iron hoops of an oval form. The short knotty pike which forms part of their armour, serves not only as a weapon of defence, but is likewise used for supporting the gun between its forked branches, by fixing the pointed end in the ground, which enables a person to take a more accurate aim. The Ingushians are excellent marks-men, but bestow little attention either to agriculture or the rearing of cattle, and are consequently in a state of poverty. They inhabit the vicinity of the sources of the Kumbelee and Sunsha, and extend their habitations along the high mountains to the eastern bank of the Terek, where they border on the Ossetes.

We are assured by a Roman catholic missionary, that these people possess an old church, which is built according to a model taken from the sepulchre of our Saviour. The Ingushians, though rather inclined to profess the Mahometan faith, keep this building in constant repair. It is held in such profound veneration that nobody ventures to enter it, and the natives, when viewing it at a distance, prostrate themselves in adoration. Their most sacred oaths are made in the name of this church.