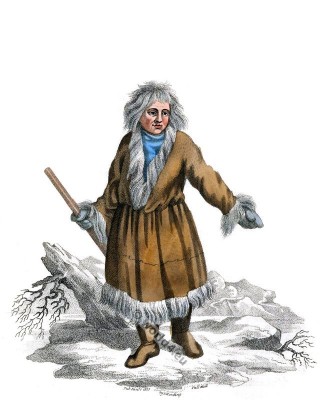 A Kamchadale in his Winter Dress.

A Kamchadale in his Winter Dress.

A CHAIN of stony and barren mountains, extending from the fifty-first to the sixty-second degree of north latitude, forms the peninsula of Kamtchatka. Destitute of a soil capable of cultivation, and exposed to the severest frosts during the summer, it is neither capable of nourishing troops, nor of rewarding the toils of the labourer. The Kamchadals call themselves Itelmanns, that is to say, inhabitants. They have long been established in these gloomy territories. They have no traditions respecting their origin. They consider their country as the happiest region on the face of the globe, and themselves the favourites of the Gods, the most fortunate of mortals.
The Kamchadals are small and ill proportioned. Their head is particularly large, their limbs slender, and their step slow and ungraceful. They are of a tawny complexion, with dark hair and thin beard. It is with much difficulty that they reckon as far as three, without having recourse to their fingers, and their embarrassment is extreme when the number exceeds ten. They distribute the year into four seasons and ten months, and measure the distance from one place to another by the number of nights passed upon the road.
In spite of their love of indolence, necessity obliges them to labour in all seasons, and both sexes have their respective occupations. In summer, the men are engaged in their fisheries, the women in cleaning and drying fish, and in collecting berries and roots, which serve both for food and medicine. They also prepare a particular herb, which, by fermentation, produces a sort of beer. In winter, the men devote their time to hunting the fox and the sable, until the spring again calls them to their fisheries.
The Kamchadals never eat any food hot: this practice contributes greatly to the preservation of their teeth, and to strengthen the fibres of the stomach. No people drink so much water as the Kamchadals. They have invented a beverage which produces the most intoxicating and fatal effects. The yellow mushroom called moukhomore, so well known to the Russians, and used by them for the purpose of destroying flies, is also to be found in Kamtchatka. The inhabitants steep it in water, and the liquor produces an effect similar to that of opium. When drank in moderate quantities, it makes them gay and cheerful, but taken to excess, it brings on a state of intoxication bordering upon madness.