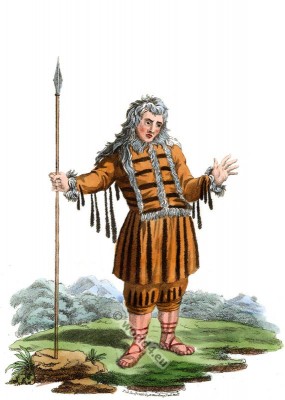 A Koriak in his Holiday Dress.

A Koriak in his Holiday Dress.

THE ties of blood form no obstacle to the conjugal union of the Koriaks. They are permitted to marry their cousins, aunts, and even their mothers-in-law. Contrary to the custom of the greater part of the people of the East, the husband does not purchase his wife; but, like the Kamchadales, the lover is obliged to pass several years in the service of his mistress’s father: he must also succeed in touching her, in the manner already described in Plate 51; and if he should happen to fail in obtaining this object, he forfeits the fruits of all his past labors. The rich are not exempted from these obligations.
The Koriaks are permitted to take several wives; the richer sort very frequently have four. They do not marry for the sake of keeping all their wives around them; but, as they are obliged to divide their rein-deer into several troops, and often go to visit them, they find it convenient to have a wife at each of these stations. This custom saves them the trouble of taking one of their wives with them; besides which, they find it highly serviceable to have a sort of confidential domestic, capable of watching over the conduct of their pastors. They rarely keep any concubines, but when that is the case, the unfortunate women are held in the greatest contempt. Even their legitimate wives are treated with little or no respect; their brutal and jealous husbands keep them in a state of abject slavery, set them about the vilest occupations, and even kill them upon the slightest suspicion.
It is the practice of the parents to present their male children with a flock of deer; of which they take possession, as soon as they are capable of super-intending it. In the mean while, they are brought up to labour and fatigue, to assist the pastors, fetch water, and carry burdens, in proportion to their strength.