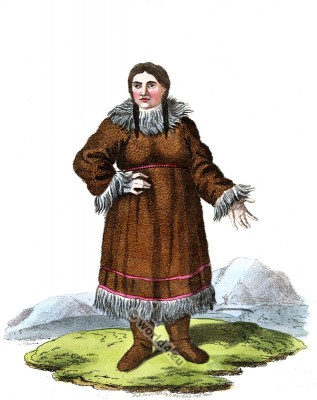 A Kamtschadale in his ordinary Dress.

A Kamchadale in his ordinary Dress.

WHEN we consider the natural productions of Kamchatka, and the severity of the climate of this peninsula, some idea may easily be formed of the clothing of its inhabitants. Their dresses are made of rein-deer skins, which they procure of the Koriaks in exchange, and of the skins of birds, dogs, and the sea-calf. In winter, the Kamchadales wear two garments. The upper is the same for both sexes; but the under one, worn by the females, is some-what different. It consists of a pair of drawers and a waistcoat sown together. The women of Kamchatka always wear gloves, even during the night. Formerly, the unmarried females divided their hair into several braids, in imitation of the Tartars: but at present, they separate it, at the crown of the head, into two only, which they collect together at the hinder part of the neck, so as to make it form a single tress, ornamented with ribbons, glass beads, &c.
The dog is the only domestic animal known in Kamtschatka: they are very numerous, and are much prized by the inhabitants. The care of them is confided to the women, who feed them with fishes bones; and so fond are they of these animals, that they often permit them to partake of the food provided for the family, and to eat out of the same bowl. These dogs are of the middling size, and commonly white, black, or grey. Kracheninikof, in his “Description of Kamtschatka,” considers them a species of our domestic dog; and the editor of Captain Cooke’s third voyage informs us, that they very much resemble the English hull-dog. Considering their size, they are remarkably strong: one dog will carry a load of seventy pounds weight. The team consists of eight dogs yoked two by two. The sledges are made of two curbed pieces of birch-tree wood, confined by four cross pieces, at the distance of twelve inches from each other. Instead of a whip, the driver holds in his hand a hooked stick, about three feet long, at the extremity of which are fastened several small bells, the sound of which serves to encourage the animals. When he wishes to stop, he forces the stick into the snow, and places, at the same time, one foot on the ground, in order to diminish their pace gradually. The men travel seated on one side of the sledge: the women only sit within, and it would be considered disgraceful to imitate them. They travel only at the rate of about eight leagues per day, and even to per-form this, it is necessary that the road should be well beaten, and that skaits, made of bones, should be fastened to the sledge.