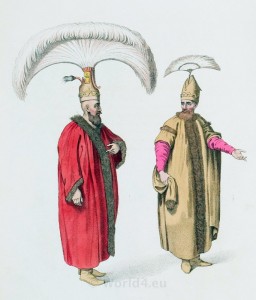 Capidji Bachi. Officers of the Sultan’s guard in official attire.

THESE officers, who are in their dress of ceremony, which consists of rich silks, trimmed and lined with valuable furs, and with a singular crested plume on their heads, are called Capidji Bachi, and are for the private service of the Sultan. To them is attached the honor of carrying the bow-string, when the monarch orders them; and their appearance, therefore, with that instrument in their hands, is dreaded by all.

Note:  An Inferior Officer of the Janissaries. Ottoman Empire.