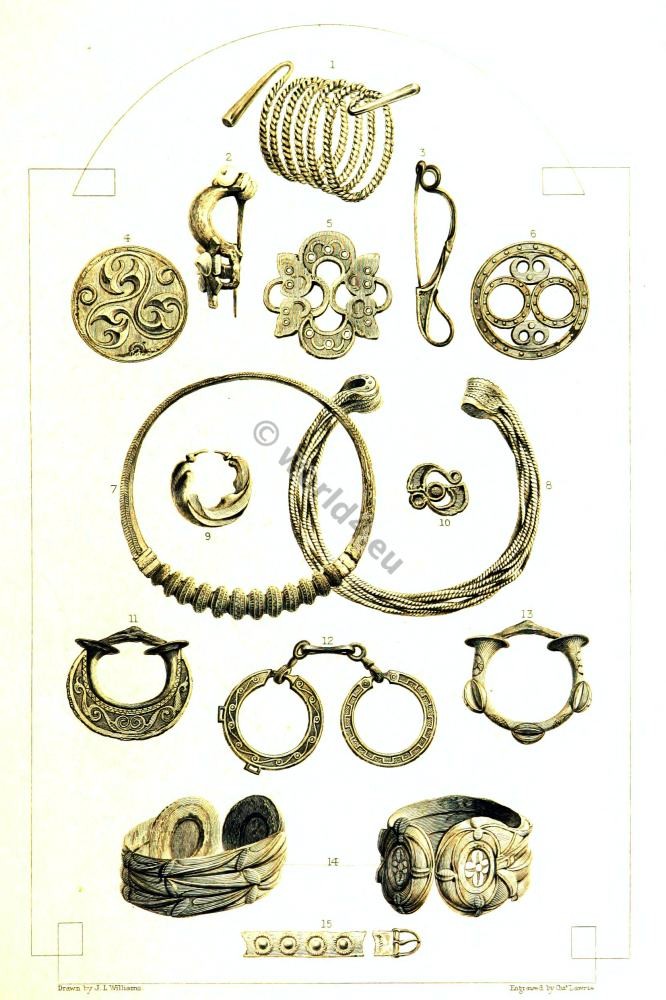 The original is a drawing made for this work by J. L. Williams in the year 1871. The larger number of the relics are drawn from the objects themselves in various museums and private collections.

In the British Museum, and several other public and private collections, the relics of that period when the Celt chiefly occupied these islands are to be found in remarkable variety.

The materials of which warlike and industrial implements are formed are stone, bronze, and iron, and it has been thought that these may indicate three successive periods, but there is perhaps no unquestionable reason for assigning to them a strictly chronological significance, as they may possibly vary only according to the social condition or the degree of importance of the persons or tribes to which they belonged. It is by no means certain, for instance, that the barrows or excavations where stone implements are found belong to an earlier time than those containing the articles of bronze; while ornaments of silver and gold, or of gold combined with bronze, have been discovered, and glass vessels, beads, trinkets, and various kinds of urns, ornamented cups, and drinking-vessels have also been found in the cromlechs or burial places, and the cairns and tumuli in different parts of the country.

The ruder implements are arrow-heads, or short chisel-shaped knives of stone set in handles of deers’ horn, knives and daggers of flint and horn, stone hammer heads pierced or grooved for the reception of the hafts or handles, bodkins, armlets, and pins of bone and hard wood, and beads, pieces of amber, and other fragments of ornaments.

The bronze adze-heads (named “celts”), spears, knives,and swords are many of them remarkable for their shape and finish,and not only the moulds for casting them, but also the portions of metal and the cinders found in the same spots as the moulds, show that they were the work of the people themselves; while the presence of some of the most remarkable of the weapons, cups, and ornaments in the “cists”— or rude sarcophagi formed of slabs of sandstone sunk in the ground, and known to be the most ancient of the burial places which have been discovered—or in the mounds (or tumuli) and “cairns,” or heaps of stones in other parts of the country, attest their antiquity. Curiously wrought ear-rings and beads of gold and amber have been discovered, and “torques,” or collars of gold worn round the neck and descending to the breast, as well as necklaces, gorgets, or breastplates, and armlets of bronze and gold, many of them beautifully ornamented, are among the more valuable relics.

The ” torque,” or neck-chain, appears to have been an ornament of distinction, and consists of small rods of gold, silver, or bronze, so twisted as to form a kind of flexible ring, not completely joined, but capable of being opened where the extremities approach, in order to admit the neck of the wearer.

Other specimens have been found which consist of elaborately chased and ornamented links. The Celts wore their rings on the middle finger, and the women wore numerous ornaments, consisting of beads, which formed necklaces, pins of bronze, and ivory bracelets. Not only these articles, numbers of which have been discovered in tombs and “barrows,” but the ordinary household utensils and pieces of furniture, show a state consider ably above barbarism. Their wicker-work was almost as ingenious and as widely utilized as the bamboo plaiting of the Chinese or Japanese.

Their light and elegant baskets, which were adapted to all kinds of purposes, were the fashion in Rome itself; their river boats, or “coracles,” were woven of compact and tenacious withes; the very walls of their huts or houses were often composed of hurdles which held an impenetrable coating of cement or plaster. Cups, jars, and funeral or cinerary urns were common before the Roman invasion, and many of them are remarkable examples of ornamentation.

We have already alluded to the coinage, to which a very early date must be assigned; and not only the chequered cloth and braces of the Gauls, but the robes and apparel of a higher civilization, and obtained from people coming to Britain to trade, distinguished the inhabitants of the coast; even though in the interior, ruder and less enlightened tribes may have clothed themselves in the skins of animals. On the whole, it would appear that a considerable degree of civilization was not wanting, but that there was too little organization, too great a difference among the tribes inhabiting the island, to enable the people to erect large buildings or permanent monuments.

Source: “Pictures and Royal Portraits illustrative of English and Scottish History. From the Introduction of Christianity to the Present time.” Author: Thomas Archer. Published in London, 1878 by Blackie & Son.