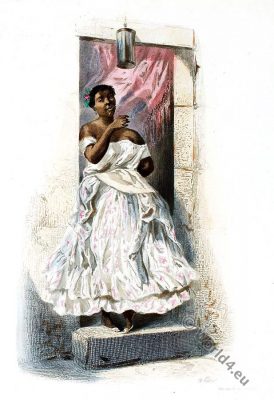 The mulatto is a person whose ancestors (especially parents) had a black, sometimes white skin color.
The term “mulatto” refers to the Spanish and Portuguese word mulato (fr. mullâtre) appeared first in 1544 in the work of Jean Fonteneau “La Cosmographie avec l’espère et régime du soleil du nord dans le sens général de métis”. (Source Wikipedia)
The Real Academia Española, the highest authority for the Spanish language, indicates that mulato refers to the word mulo / mula = mule for the cross between horse and donkey, which in turn derives from the Latin word mulus with the same meaning. In the past, the idea was that mulattoes were barren like mules.
In Oriental Studies, one holds the Arabic word muwallad for the origin of mulatto. In medieval Moorish Spain, the descendants of locals and Arabs were called muwalladin.
According to the authors Marco Carini and Flora Macallan, the origin could also be found in Madagascar. The island of St. Marie (today’s Nosy Boraha), 18 km northwest of Madagascar, served as a trading hub for many pirates since the 17th century. Since the mostly light-skinned pirates enjoyed a very high place among the island inhabitants – a lot of money, good warriors -, it was not uncommon to find closures between the pale-skinned pirates and the dark-skinned islanders. From the 18th century onwards, children from these connections even formed an independent social group, the Malatas or the Mulatts.

In the part of the world in which most people of mixed African-European origin live, namely Latin America and the Caribbean, the term “mulatto” is very common, is used as a self-designation and is regarded as largely unproblematic.

The term mulatto was used in the system of the Castas, in which the people in the Spanish colonial empire were divided according to racial criteria, as well as in the language usage of the French and English colonies in America as well as in the USA only for the first generation of the descendants of blacks and whites.

In the USA, the term mulatto was also widespread until the advent of the so-called One-Drop Rule. According to the One-Drop Rule every person with a black ancestor (“a drop of blood”) was considered black (The principle of “invisible blackness”). This principle was introduced into legislation and spread to the general public. As a result, mulattoes were no longer listed in the census as of their own population group. Although the One-Drop Rule has long been abolished by law, it is still anchored in the consciousness of the American population, both whites and African Americans. People with a white and a black parent or even a black grandparent are generally considered blacks. A general awareness for a mixed descent increases only since the 1980er years and the census now also offers the possibility to be biracial (“two racy”) or multiracial (“more racy”) to classify.