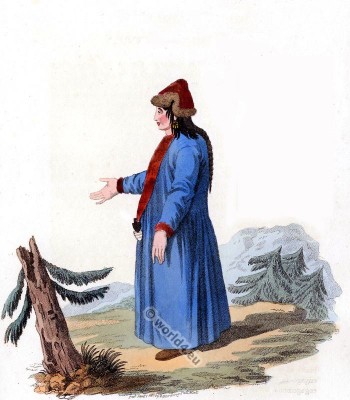 A Barabintzian Girl. Costume of the Russian empire.

THE dress of the Barabintzians is similar to that of the Baschkirians, but more wretched. Contrary to the custom of the rest .of the Tartars, the men do not shave their head; they also suffer their beard to grow, but not to any considerable length. The married women divide their hair into two braids; the unmarried ones wear several of these braids, which they ornament with ribbons: the head-dress of the married women consists of a low bonnet, trimmed round with fur; while that of the single is generally pointed, decorated with a border, and less than that worn by the former. In a few of their districts, it is not uncommon to see the women with bonnets ornamented with glass beads, like the Basch-okirians. Their only dress, in summer, consists of a chemise made of stout cloth, and embroidered in different colours, like that worn by the Tscheremisses, and already described.

So late as the middle of the eighteenth century, the Barabintzians were devoted to Shamanism; but through the zeal of some neighbouring Moullahs, who came to preach to them in their deserts, they have since been converted to the faith of Mahomet. At present, they possess, a few huts which they call mosques, and a few men, not even able to read, to whom they have given the appellation of priests. They have gained little by the change .of -religion but an addition to their former superstitions, since they have religigously retained all those of their ancestors, and, particularly, their magicians. They still bury their dead with their clothes and household utensils, and carry provisions to the grave.
In their festivals, marriages, and funerals, they observe the same ceremonies as the Baschkirians; but they are more moderate in their amusements, ‘and, in general, lead a more regular life than that nation. It is not often that they have many wives, but they always maintain them as well as their poverty will permit. Whether these wives are purchased with silver or cattle, the kalym is often as low as fifteen, and never exceeds two hundred and fifty livres. They sometimes borrow a sum of money of their Russian neighbours, in order to pay the purchase of their wives; to liquidate which, they engage to cultivate, on certain conditions, the lands of their creditors-engagements which they never fail to fulfill.