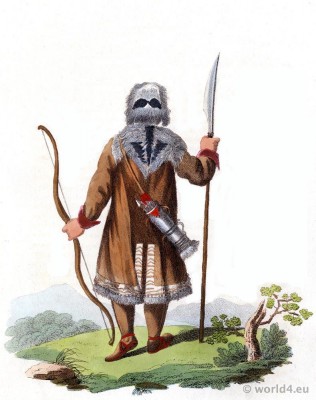 Back Figure of a Yakut in his Hunting Dress.

Back Figure of a Yakut, Sakha in his Hunting Dress 1803.

Front of of a Yakut, Sakha in his Hunting Dress.

ALTHOUGH the Yakuti are condemned to a wandering state of existence, they rarely change their winter habitations: in autumn they return to the same huts which they occupied during the preceding winter.  If, by accident, they have so far wandered after their troops as not to be able to return to their ancient dwellings, they easily console themselves for this loss, and remain on the spot where they happen to be when the severe weather sets in, and set themselves immediately to building of huts. The construction of their dwellings requires no great skill; it consists, chiefly, in piling pieces of ill-squared timber upon each other, and closing the joints with moss. Large benches are ranged round their huts; their household furniture and culinary utensils are far from being costly, and are kept in repair with little expcnce or trouble. Excepting the bottoms of their boilers, they are all of wood, leather, and the bark of the birch tree.

As they have no regular hours of repast, and eat at all tunes in the day, a boiler is constantly to he seen on the fire. The Yakuti devour every thing, excepting pork, frogs, and insects: plants, herbs, and roots, arc carefully collected by them; but above all, they are particularly fond of small mountain rats and mice. In summer they live chiefly on milk, and in winter on dried fish. The Yakuti of the North, during the whole of the year, live principally upon fish. In summer time they often intoxicate themselves with brandy and milk, and the fumes of tobacco: to bring on a state of intoxication more rapidly, they make use of the infusion of moukhomore, so common to the Kamtchadales and several other nations.
Notwithstanding this want of cleanliness in their houses, they are extremely desirous of being distinguished for the elegance of their dress: their summer garments are of shamois; in winter they wear skins, particularly those of the rein-deer: the sleeves of their garments are narrow; they descend to the knees, and are laced in the front. The men cut their hair extremely short: in summer they go hare-headed; in winter the skin of the head of some savage animal serves them for a cap. Their breeches are short; skin stockings serve them instead of boots; they are drawn up tight, in order that they may take the shape of the leg and thigh, and are laced to their breeches.

Note:  Back Figure of a Female Shaman, or Sorceress of Krasnajarsk.