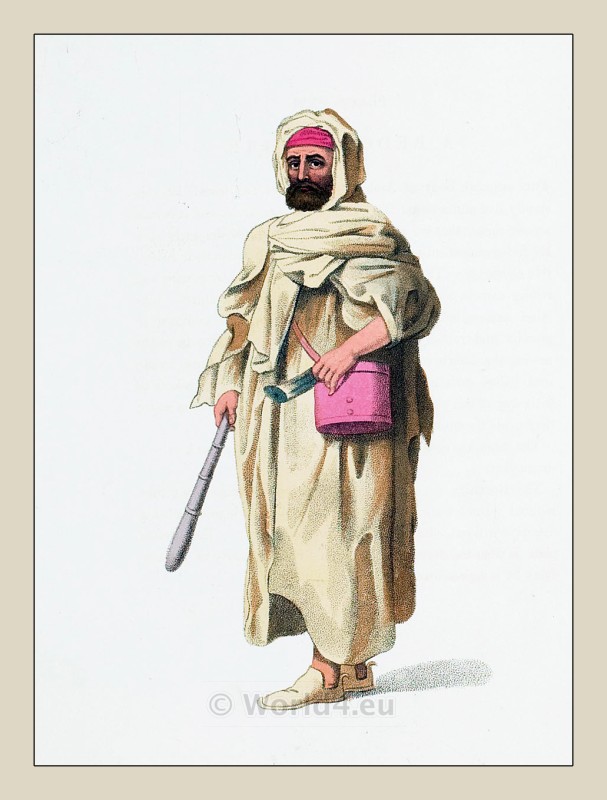 THIS singular body of Arabs never inhabit any town, but constantly live under tents. They are the genuine Arabs, and it is only among these, that we may look for the customs of the early ages.

By living almost entirely by themselves they still retain their distinctive character. They generally obtain a livelihood by rearing and selling camels, as many of the tribes disdain agriculture. Like other nations, who lead a wandering life, they are addicted to plunder and robbery, particularly when they perceive travellers passing the deserts in small parties. They are divided into numerous tribes, each of which have different customs, particularly in their way of life. All the Arabians have black beards, upon which they pride themselves.

The Shiecks (Sheikh), or superiors, always appear on horseback or on a dromedary. The Bedouins, who wander about the desert, can go a long time without water; instances have been known of some persons being five days without, and yet did not materially suffer. The present plate is from the drawing of a Bedouin in the vicinity of Alexandria; he is represented as in quest of plunder.

Source: The costume of Turkey. Illustrated by a series of engravings; with descriptions in english. By Octavian Dalvimart. Printed by Howlett and Brimmer. Published in London, 1802.