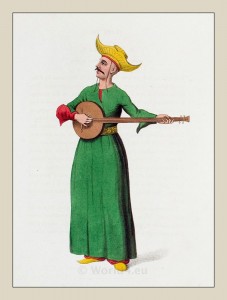 A Turkish musician at the Sultans court. Ottoman Empire.

A MUSICIAN, BELONGING TO THE GRAND SIGNIOR.

THE opinion that has been formed of the Turkish music by different people, has been very various. Some have represented it as harsh, unskilful, and disagreeable; while others, on the contrary have asserted that it is pleasing, and possesses a strong power over the passions, especially when accompanied with their engaging style of dancing. One author has even preferred it to the italian.
This difference of opinion may be accounted for; because the Turkish military music forms a combination of the most discordant sounds, while that used within the houses is excessively soft, and has a melancholy expression, by which the Turks are much affected. Their music, however, is generally performed in unison, and their instruments consist of a violin with three strings, a viol d`amour, a flute still softer than the German, a sort of tabor and Pan’s pipe, and a mandoline strung with wire, having a very long handle. The Italian music has, however, been a little introduced lately.

This portrait represents one of the Grand Signior’s band in his usual habit. He is in the act of playing upon a mandolin, something similar to the modem or Spanish guitar, though it has fewer strings than the latter, and a much longer neck than either.