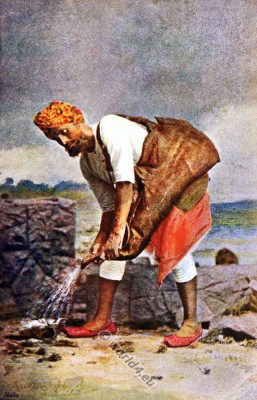 A very useful man is the Bhisti, and, relatively speaking, a hard-working individual. He carries upon his hip the entire skin of a goat, the body and legs of which are sewn up, the neck only being left open. This is called a mussack, and it is with this utensil that he performs the many duties of his calling.
It might be supposed that for the purpose of carrying water from one place to another, a pail would be the more convenient article, but the very good, and to him all powerful, reason that he always has used a mussock, and his father always used one before him, precludes the remotest possibility of his being able to grasp the advantages of any other means of transport. The Bhisti is not alone in this peculiarity. There was once a planter who being new to manners Eastern-thought to economise time and labour by providing his coolies with wheelbarrows, in place of the little conical baskets with which laborers customarily transport earth. On going to see what strides the sources of civilisation had enabled them to make with their work, he found the coolies carrying the barrows on their heads, that being, as they averred, the only possible way of getting over the difficulty of the new arrangement. They stated their opinion that the baskets were by far the more convenient, although they fully appreciated the kind forethought of the Sahib in providing the barrow with a wheel, with which to enable the poor coolie to amuse himself.

The Bhisti it is who sprinkles our paths, who brings our drinking water, fills our baths, and in time of war carries the cooling draught to the wounded. The remarkable courage occasionally exhibited by Mohamedan bhistis under fire is well known. It is stated that at the time of the distribution of Mutiny honors, a Colonel of English cavalry was asked to select a man from his regiment who had specially distinguished himself, that he might be honored by the receipt of the V. C. The regimental bhisti was chosen as being the man who had exceeded in deeds of daring every soldier in the regiment. On learning that a bhisti could not be the recipient, the Commanding Officer refused to name anyone else, on the ground that, although many acts of bravery had been performed by his men, none could be compared with the heroism of the regimental water-carrier. So it wasn’t given.