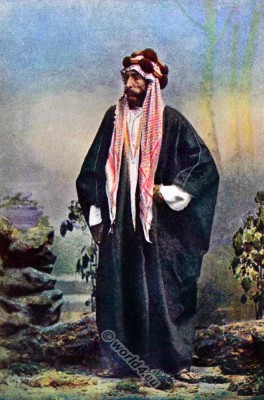 In like manner to the Cabulis, the Arabs in India are mainly dealers in horses. In Bombay especially numbers of these men are to be met, and their strange dress and picturesque appearance must be the excuse for embodying a representative of their little colony among the other pictures in this book.
The Arab steed competes very closely for supremacy with his brother, the Waler, and as no mares are ever allowed to be shipped from Arabia, the many thousands of Arab horses in use in India are all imported, the trade forming a very large and lucrative business to the men engaged. Most of the animals are sent from one or other of the provinces bordering on the Persian Gulf.
One of the objects of interest noted in the guide books to Bombay are the Arab Stables in the Bhendi Bazaar, where at times are to be seen some of the finest horses in the East. Prices vary very considerably, for while it is sometimes possible to get a tolerable animal for Rs. 300, the average outlay necessary for the purchase of a good carriage horse is two or three times that amount, while a first-class animal will realize double that again, or even more. It may be superfluous to remark that all the best and most expensive Arabs are in the possession of natives they being the only people who can afford such luxuries in these days of the depreciated and unregenerate rupee!