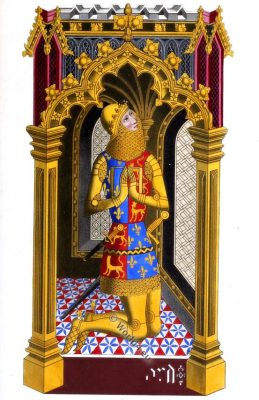 The Black Prince. Edward of Woodstock, Prince of Wales.

Member of the French-born ruling dynasty Anjou-Plantagenêt which stood from 1154 to 1399 in direct line and until 1485 in the side lines Lancaster and York the kings of England.

OUR countrymen have long been used to point out, as the representative of the English chivalry of former days, the gallant son of the third Edward, the prince whom his father rejoiced to salute as the victor of Crecy.

At the period of this great and decisive battle (26th August, 1346), Prince Edward was only sixteen years of age; he there first adopted the crest (ever since held by the Prince of Wales) of the ostrich feathers, with the motto ich dim (I serve), the spoils of a king (John, of Bohemia) who was slain in the action.

In 1356, Edward gained another great victory, the memorable battle of Poitiers, in which the king of France was made prisoner, and was brought by the prince to England. A few years after, the chivalrous prince entered Castile for the purpose of replacing Pedro IV. on his lost throne: and added to the number of his exploits another victorious campaign.

In the war in 1372, Edward was compelled by sickness to return to England. During the peace (which lasted through the remainder of his father’s reign) he increased the love which the English people had ever borne towards him, by advocating popular measures of state. The sorrow was great and universal, when their favourite prince died on the 8th of June, 1376, at the age of forty-six.

Hose and shoes worn by princes at the court of Edward III.

He was buried with great pomp in Canterbury Cathedral, where his monument and effigy still remain. He is there represented in armour which differs but little from that in which he is clad in the accompanying plate. The king followed his son to the grave in the following year.

Note:  Knight served by his squire and pages. 11th century.

This latter portrait of the Black Prince is taken from the same painting, found on the walls of St. Stephen’s Chapel at Westminster, which has furnished us with the portrait of his royal father, Edward III., already given. Prince Edward occupies the compartment of the picture immediately behind that of his father, and is, like him, represented kneeling in adoration of the Virgin, who in the original is seated in a larger compartment above.

Part of the figure of the prince, as well as of those behind him, was cut off in the painting by a square place, apparently subsequent to the original design, and which seems to have been intended for the insertion of a table or shelf.

The portrait was probably made about the time of the battle of Poitiers, when the prince was twenty-six years of age; and he is, accordingly, represented as a beardless youth, bearing strong traits of resemblance to his father.

His helmet, surrounded by a coronet resembles that on the effigy at Canterbury. In other respects his armour varies but little from that of King Edward. He is said to have gained his name of the Black Prince by the colour of the armour which he wore in battle. In our painting he is not so distinguished; but he perhaps did not introduce this peculiarity in the armour which he wore on pompous occasions, and in which he is no doubt here represented. Three letters only of the end of his name are preserved at the foot of the picture, which are a convincing proof that the mutilations were made after its completion.

The two figures which we have given from these curious paintings are both represented in armour. Other figures in them are represented in robes of state; and we have given at the foot of the preceding page the legs from one group, as offering an excellent specimen of the hose and shoes worn by princes at the court of Edward III. 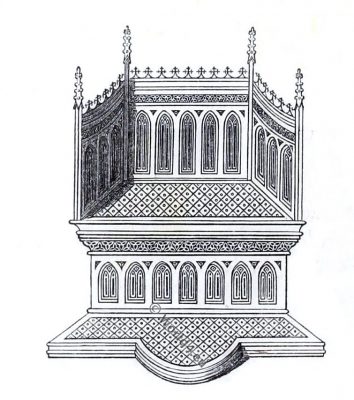 Throne by the Flemish illuminator Jehan de Grise and his workshop, 1338-44. Romance of Alexander c. 1400, in the Bodleian Library.

(Edward of Woodstock, Prince of Wales, known as The Black Prince, but actually Eduard Plantagenet; KG (1330-1376) was the eldest of the seven sons of King Edward III. with his wife Philippa, and father of King Richard II. Because of his once supposedly black armor, which can still be seen today in the cathedral of Canterbury, he was called The Black Prince. But this name did not appear until about 200 years after his death.)