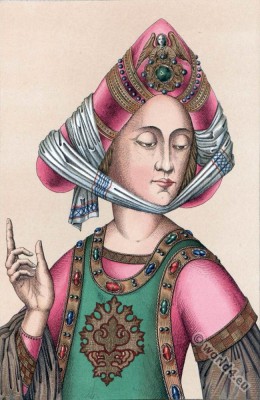 Half-length portrait of a lady from a painting which is the preaching of John of Capistrano and represents the consequences of his exhortations. It is located in the municipal gallery to Bamberg.

This portrait shows in particular detail, the characteristic headgear that in the Netherlands and France and also exceptionally recurs in Germany at this time. It consists of a sort of turban, made of red velvet with white towel wrapped around, which holds him at the same time under the chin. A golden clasp with angels and gems adorns its center. The richly decorated with gold, pearls and precious stones outer garment, of which only the upper part is visible here, is widely cut by Burgundian type on both sides, so that you can see the petticoat up to the hips.

Source: Costumes, art and utensils from the early Middle Ages until the end of the eighteenth century, after simultaneous originals of Dr. J. H. Hefner-Alteneck. Publisher of Heinrich Keller.
Frankfurt a. M. 1879-1889.