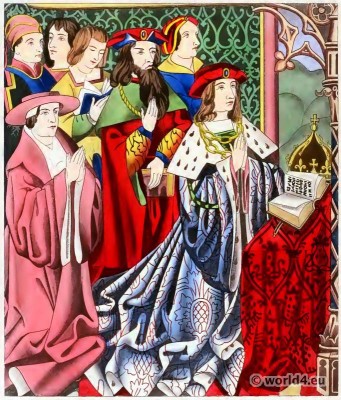 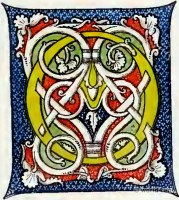 OUR plate represents a part of the group which occupies the left-hand compartment of the tapestry of Coventry, already described. It is one of the many illustrations of our great dramatic bard which we are enabled to give from contemporary pictures. The nobleman distinguished by his flowing beard, is said to be the “good duke Humphrey;” whilst in the person kneeling behind the king, we readily recognise his uncle and rival, the Cardinal Beaufort. The tapestry must therefore, have been made before 1447, the date of Duke Humphrey’s death (1390-1447). This group has a peculiar interest for the reader of Shakespeare, since it exhibits together several of the personages who figure most prominently in the Second Part of King Henry VI. Gloucester presents much of that character which is so vividly painted by the bard: he is the man loved by the people, and respected by the good among the nobles:

“The common people favour him, Calling him,— Humphrey, the good duke of Gloster; Clapping their hands, and crying with loud voice— Jesu maintain your royal excellence! With— God preserve the good duke Humphrey!”

We can hardly contemplate the rival nobles of Henry’s court thus assembled together before our eyes,— the parties of Beaufort and Gloucester occupying their places in the same court, perhaps but a few months before the death of their two leaders,— Yorkists and Lancastrians met amicably under the same roof but a few years before the breaking out of those bloody civil wars which carried desolation throughout the land,—without calling to mind the jealousies which were at this period rankling in their bosoms, and the intrigues in which they were already engaged. The words of the Earl of Salisbury present themselves forcibly to our mind:

“I never saw but Humphrey duke of Gloster Did bear him like a noble gentleman. Oft have I seen the haughty cardinal— More like a soldier, than a man o’th’ church, As stout, and proud, as he were lord of all,— Swear like a ruffian, and demean himself Unlike the ruler of a common-weal. —Warwick, my son, the comfort of my age! Thy deeds, thy plainness, and thy housekeeping, Hath won the greatest favour of the commons, Excepting none but good duke Humphrey. —
And, brother York, thy acts in Ireland, In bringing them to civil discipline; Thy late exploits, done in the heart of France, When thou wert regent for our sovereign, Have made thee fear’d, and honour’d, of the people:— Join we together, for the public good; In what we can to bridle and suppress The pride of Suffolk, and the cardinal, With Somerset’s and Buckingham’s ambition; And, as we may, cherish duke Humphrey’s deeds, “While they do tend the profit of the land.”

In the picture, the face of the cardinal is sufficiently characteristic of the ambitious and cunning prelate, pourtrayed by the pen of the poet. The cut on the preceding page, representing a herald bearing a banner, is taken from the Shrewsbury book*.

* The proper blazon of the banner would be, if seen on the dexter side,— Quarterly; 1st and 4th, Azure, three fleurs de lis or, France; 2nd and 3rd, Gules, three lions passant guardant, in pale, or, England; being the arms of King Henry VI.: impaling those of his queen, Margaret of Anjou; namely, Quarterly: 1st, Barry of six, argent and gules, for Hungary; 2nd, Azure, semée de lis or, a label of three points gules, Naples; 3rd, Argent, a cross crosslet, between four plain crosses coupee, or, Jerusalem; 4th, Azure, semi de lis or, a bordure gules, Anjou; 5th, Azure, semée of cross crosslets, fiche, two barbels hauricutand addorsed, or, Barr; 6th, Or, on a bend gules, three alerions argent, Lorraine. The banner is fringed with the colours of Queen Margaret, white, green, and red. The figure which grasps the staff of the banner bears on his surcoat the arms of John Talbot, the first earl of Shrewsbury, and of his alliances, marshalled in a very unusual manner: being his own, impaling those of the mother of his first wife ; both being surmounted by an escutcheon, containing the arms of the grandmother of his second wife:— Quarterly: 1st and 4th, Gules, a lion rampant, within a bordure engrailed, or, Talbot; 2nd and 3rd, Argent, two lions passant gules, Strange. These impale another coat:— Quarterly 1st and 4th, Argent, a bend between six martlets gules, Furnival; 2nd and 3rd, or, a fret gules, Verdon. On the centre, over these impaled arms, an escutcheon:— Quarterly, 1st and 4th gules, a lion statant guardant argent, crowned or, Lisle; 2nd and 3rd, Argent, a chevron gules, Tyes.