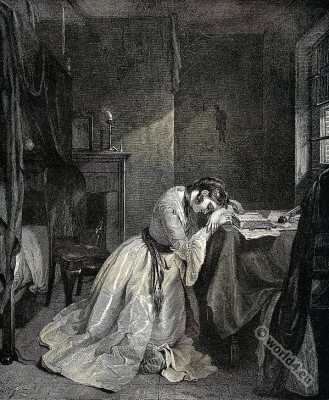 ARRESTED on a charge of debt, Clarissa has been taken to the sponging-house. There Lovelace visits her. After describing the forlorn room she occupies, he says :

“She was kneeling in a corner of the room, near the dismal window, against the table, on an old bolster (as it seemed to be) of the coarse couch, half covered with her handkerchief; her back to the door, which was only shut-to; her arms crossed upon the table, the forefinger of her right hand in her Bible. She had perhaps been reading in it and could read no longer. Paper, pens, ink, lay by her book on the table. Her dress was white, lutestring, exceedingly neat. Her head-dress was a little discomposed; her charming hair in natural ringlets, but a little tangled as if not lately combed, irregularly shading one side of the loveliest neck in the world, as her disordered, rumpled handkerchief did the other. Her face * * * was reclined when we entered, upon her crossed arms; but so, as not more than one side of it to be hid.”

Clarissa, or, the History of a Young Lady, is an epistolary novel by the English writer Samuel Richardson, who appeared in 1748. Clarissa is an exceptionally long novel; may well be the longest novel in the English language. The full volume of its third edition, revised by Richardson, reaches over a million words. Only the first edition reaches nearly 969,000 words. The novel is one of the early Romantic masterpieces. One of the early imitators of Richardson contribution to this sensibility is the French Romancière Jeanne-Marie Leprince de Beaumont with her “new Clarissa. A true story” from the year 1767. The book touched not only England, but found throughout Europe an enthusiastic reception. Approximately two centuries later called the German-language literary history “Clarissa” a masterpiece.