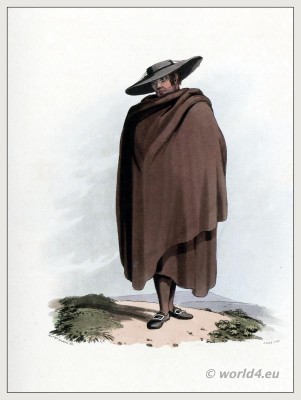 A peasant from the corregimiento of Salamanca 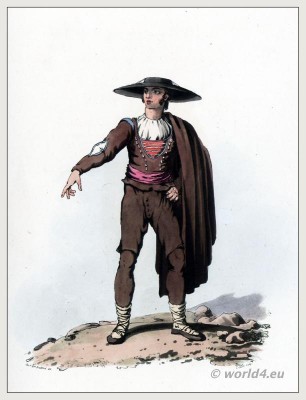 A peasant from the corregimiento of Salamanca

PEASANTS OF THE CORREGIMIENTO OF SALAMANCA.

UPON entering the Spanish territories on the road from Almeida to Salamanca, the traveller is struck with the change that appears in the dress and language of the people: but the circumstance most strongly marking a distinction greatly in favour of the Spaniards, is the cleanliness of their dwellings, which generally exhibit a degree of comfort and independence scarcely surpassed by what is seen in the best cottages of England. The costume of the men is dramatic and picturesque, and is well calculated to display a handsome person. It consists of a dark brown jerkin, having a sort of open stomacher, ornamented with curiously wrought buttons of silver, a sash or girdle round the waist, short cloth breeches, reaching half way down the thigh, with stockings of the same materials meeting them, and buskins tied round the feet and ancles with leathern thongs. A large cloak is drawn over the whole person, or worn folded on the shoulder, not without some attention to graceful effect.

This fashion is not peculiar to this district on the Frontier, but prevails in the neighbourhood of Salamanca, and through a great part of the kingdom of Leon.

Note:  Shepherds of the plains of Leon in their winter clothing