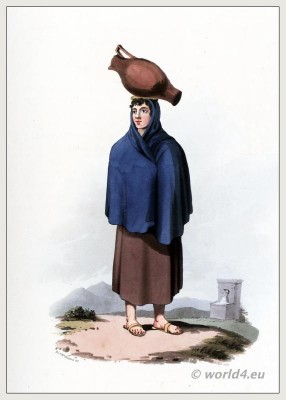 THE approach to Guarda through the valley of saint Anthonio, formed by two parallel branches of the Serra da Estrella is beautiful and romantic.
The city is built on the highest of these mountains, and is considered the most elevated situation in Portugal. Its climate is cold and damp, but the salutary effects of the mountain breezes is visible in the blooming countenance and animated character, which distinguish its inhabitants, from those of the plain.
There is something singular and picturesque in the appearance of the young women, who are employed in carrying water pitchers to and from the wells. When empty, the pitcher is balanced on the head in the manner represented by the sketch, unsupported by the hands, and without any apparent restraint. Their dress is far from inelegant, and consists of no other colours than brown and blue. They wear no stockings; but their feet are protected by neat sandals.