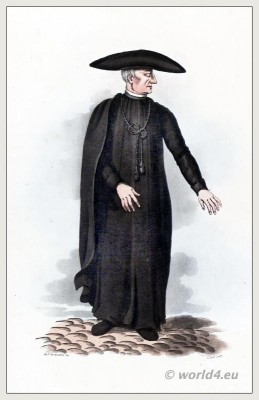 THIS sketch, which represents the ordinary dress of the Spanish ecclesiastics, was meant to convey some idea of a very respectable character of Salamanca, Dr. Curtis.
This gentleman, no less distinguished as an enlightened scholar, than valued as a citizen, has long presided over the Irish seminary with credit; he is now upwards of seventy years of age, and having been removed from his native country at an early age, he has acquired the habits of that in which he has settled, without losing the vivacity peculiar to his own. His services to the English army in general, and to many individuals of it, and the assistance afforded by his knowledge of the language, and his local information, made him well known and esteemed.
When the affairs of Spain took an unfavourable turn, all personal concern seemed to be lost in anxiety for his pupils; and when. he found their studies interrupted, and their stay in Salamanca unsafe, he recommended them to the protection of the English general, by whose authority they were appointed to situations in the army, which they accompanied to England. What has since become of the worthy rector has not been ascertained; but it is to be hoped that he will either find safety in Spain, or an honourable asylum in his native country.