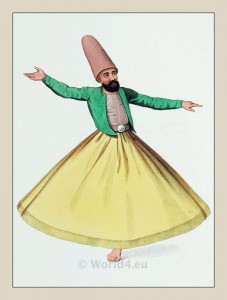 THE Dervishes, as was mentioned in Plate XXIV., are divided into thirty-two sects; and there is not perhaps one of them, of which the regulations or practices are more curious than those of the sect of Melewys. of which Djelal-ud-dinn Mewlwana (Dschalal ad-Din Muhammad Rumi) was the founder. This sect is particularly distinguished by the singularity of their mode of dancing, which has nothing in common with the other societies. These dervishes also have peculiar prayers and practices. When they perform their exercises in public, it is generally in parties of nine, eleven, or thirteen persons. They first form a circle, and sing the first chapter of the Koran. The chief, or Scheik, then recites two prayers, which are immediately succeeded by the dance of the dervishes. They all leave their places and range themselves on the left of the superior, and advance towards him very slowly. When the first Dervish comes opposite the Scheik he makes a salutation, and, passing on, begins the dance. It consists of turning rapidly round upon the right foot with the arms widely extended.