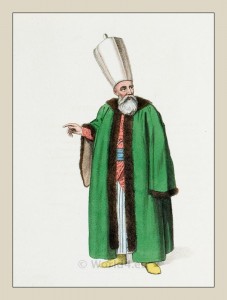 A Member of the Divan.

A Member of the Divan. Ottoman Empire officials.

THE Divan, or council of the Grand Vizier, was formerly composed of only six other viziers or pachas of three tails; to whom, when the law was to be consulted, it was usual to add the mufti. But when Selim III. ascended the throne, he abolished this council, and created another, to which every important business is entrusted. It consists of twelve of the first and most distinguished officers of the government. The Grand Vizier and the Mufti are the presidents; one, as connected with the temporal affairs of the empire, the other, as the interpreter of the law. This plate represents one of the other ten members.