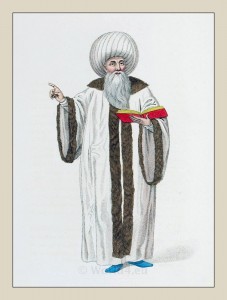 The Mufti or Chief of the Religion.

The Mufti of Istanbul or Chief of the Religion. Ottoman Empire.

In no part of the world have the ministers of religion more power than in Turkey, particularly the higher orders. In the grand Mufti, or Sheik-islam, is combined almost the supreme power of the law as well as of religion. On all questions of a doubtful nature he is consulted, even by the Sultan himself, who promulgates no law, does not declare war, or levy any tax, until it has received the Mufti’s sanction; and his decisions are called fetfas. It is the Mufti who girds on his sabre at his coronation, reminding him at the same time of his duty to promote the welfare of religion. To counterbalance, however, this vast power of the Mufti, which would otherwise be equal to that of the Sultan, the latter is able to depose, banish, or even put the Mufti to death, should he displease him.
Hence he is, too frequently, the mere slave of the Sultan. The Muftis in the different parts of the empire are all appointed by the grand Mufti, who resides at Constantinople, and they here act in a double capacity; as expounders of the Koran, and law-givers; but they can never be appointed judges, although they form a part of the body of Ulemas.
The contempt which all Musssulmen have for those of a different religion, shows itself in the courts of justice, where the evidence of a Jew or a Christian is not often admitted, and when it is, that of one Mussulman has more weight than the positive evidence of ten who profess a contrary religion.