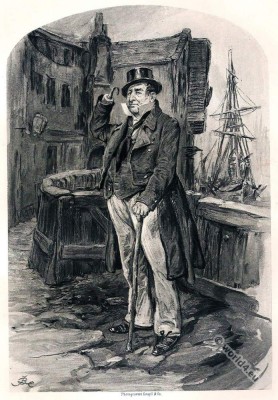 A GENTLEMAN in a wide suit of blue, with a hook instead of a hand attached to his right wrist; very bushy black eyebrows; and a thick stick in his left hand, covered all over (like his nose) with knobs. He wore a loose black silk handkerchief round his neck, and such a very large coarse shirt collar, that it looked like a small sail.