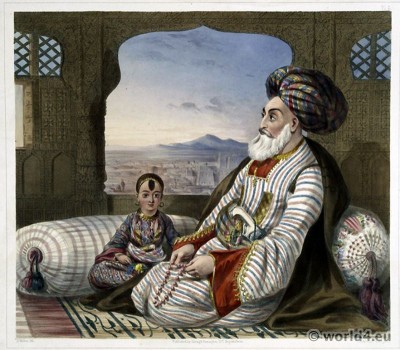 My presentation to this celebrated personage took place in camp at Peshawur, January 5th, 1841, when he was on his way to Calcutta as a prisoner of state. I found the ex-Ameer of Caubul seated on the carpet of his tent, eating sugar-cane, with two of his youngest sons, and surrounded by his chiefs and relations. He received me most courteously, and returning my salutation ” Ai Alaikoom Assalaum ” (And unto you be peace), in a deep tone of voice, assigned me a place opposite himself on his carpet. His head-dress consisted of an Afghaun skull cap, with an immense dark Cashmere shawl loosely twisted round it. A second, wound round his waist, supporting his heavy peishkubs (dagger), formed his kummerbund, or girdle. He wore a loose red silken shirt, and over it a long striped tunic of chintz, called ulkhauluk, edged with gold, and ornamented on the sleeves and breast with rows of loops and buttons of the same material. His socks were of shawl pattern, and over his shoulders hung his wide-sleeved buff cloak of camel hair (oormuk).

He entered immediately into conversation, and on alluding to the fight of Purwaundurra (mentioned elsewhere), said, ” Wai way, that the troopers had not been men like their officers, who fought like lions, they like sheep; had they only followed their leaders, I should have been a gone man.” He admired everything about us, he said, but our swords, ” which were straws.”
I was pleased with the open manner and intelligent countenance of Dost Mahommed (the friend of Mahommed), his costume, and that of his followers; their polished but independent bearing, their substantial and striking dress, their long flowing beards, finely-chiselled features, and tall, handsome figures.
In these points they were dissimilar to any Asiatics I had before met with. As we were addressed by the fallen monarch, his chiefs and family not only joined in the conversation, but cut their jokes, and laughed heartily, without ceremony. His Highness has a fine head, with features peculiarly marked and prominent, a fair complexion, strongly-arched eyebrows, and a forehead so long and singularly retreating, that his skull takes the exact form of a sugar-loaf.
Another even greater peculiarity is his big dark eyes. Sorry should I be to be placed at the mercy of those ever-changing, restless orbits, as, lit up with sudden fire, the glowing pupil dilated over the whole of the white, and as suddenly diminished to the merest dot. His complexion, too, heightened to an unnatural purple as he spoke of his battles, his hardships, wanderings, and final overthrow. I took advantage of his passing his kulleaun to us, to ask him to sit for his likeness. ” Bulla ” (yes), said he, ” if you will write my face better than some other Sahibs did, and my beard black; for see how white and untrimmed it is. They won’t let me take a bath in the city to have it dyed, and be Khoodah (by Allah), they treat me as badly as the Shaitaun (devil), of Bokhara did, when he treacherously threw me into prison.” He was waxing very wroth, rolling on his knees like a ship at sea, clutching his ill-used beard, and counting his beads furiously,- but soon subsiding, he sighed, ” I am a poor old broken man now, since cares and sorrows have come thick upon me.”
The history of his beard was this: The Mahomedan population of Peshawur had become so excited, since his arrival there, as to threaten a rescue should he enter their city; for they considered him not only vested with sanctity, but also most unjustly treated by us. It was deemed expedient, therefore, to deny “his Holiness” the privilege of an hummaum, or bath. The chieftain chatted the whole time of my visit, and rocking himself backwards and forwards, spoke bitterly of the country, and the liberty he had surrendered, the beauties of his Caubul, its ten thousand gardens, its climate, crystal streams, and snow-capped mountains. Poor prisoner! his heart must have been sad enough, as each march hurried him onward from the land he loved, to the insupportable heat of a foreign and hostile country, whither he was bound a captive.

Dost Mahommed Khaun was one of the twenty-one sons of Poynder Khaun, a noble of high distinction, and chief of the powerful tribe Baurikzye. He has risen on the ruins of the Suddozye monarchy, and became ruler of Caubul A.D. 1825. His mother was a Persian lady. This led to his being brought up among the natives of that more enlightened country, and to this connexion he is doubtless indebted for his high-bred manners, and a curiosity in regard to the history and politics of foreign nations, so far above his fellows.
As a ruler he is just and merciful, attentive to the affairs of state, and so patient and amiable, that at all times and places, in full Durbar, or during his hours of relaxation, his ear is open to the prayer of the meanest suppliant who chooses to assail him with complaints. ” Where is justice and Dost Mahommed?” were cries constantly heard in the bazars of Caubul during his captivity in Hindoostaun. In youth he has been described as headstrong, treacherous, and revengeful. Meeting in the Ghuznee bazar a former friend, who, by offending his brother, Futti Khan, the renowned Wuzzeer of Shauh Mahmood, had incurred his displeasure, he, embracing, stabbed him to the heart. Dost Mahommed is now in his seventy-second year, and has, since his return to the throne of Caubul, grown conceited in his old age. He is reported to have set up a hat, or crown (koollah), a measure totally at variance with his former simplicity of character and dislike to pomp or etiquette.

The boy seated by the Ameer is his youngest son by a newly-married wife of fifteen. He wears a bracelet and earrings, and his head is shaved in a manner peculiar to the rosy-cheeked children of Caubul. Two long plaits descend from the centre, the rest of the head being shaved closely. A thick square bunch of hair is collected, and then fastened inside the skull cap, where it hangs as an ornament between the brows. He is the image of his father. The decorations of the apartment are a facsimile of Dost Mahommed’s audience-hall, in the citadel of Ghuznee. The chief examined my sketch of him, asked if I should show it to my Queen, repeated his entreaty ” to write ” his beard jet black before doing so, said it was like, handed it round for the approval of his followers, and on my asking for my leave (rooksut), gave it me ” under God’s protection, ” with a real good English shake of the hand.

Gallery: First British Afghan War. Costumes and scenery of Afghanistan. The costumes of the various tribes, portraits of ladies of rank, celebrated princes and chiefs, views of the principal fortresses and cities, and interior of the cities and temples of Afghaunistaun. From original drawings by James Rattray and James Atkinson.