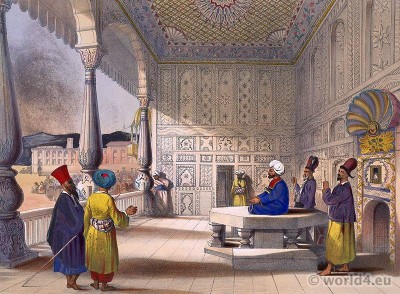 Shuja Shah Durrani in the Bala Hissar (fort) of Kabul.

Shuja Shah Durrani as Emir of Afghanistan in the Bala Hissar (fort) of Kabul.

Shauh Shujau ool Moolk (the brave King of the Universe), was a younger son of Timoor, and grandson of Ahmed Shauh. He was a younger brother of Shauh Zemaun, who defeated his brother Humauyoon, entitled by seniority to the throne, and blinding him, made himself King. Zemaun was in his turn seized by his half-brother Mahmood, who pierced his eyes with a lancet in the grove of trees at Jugdelluk, and confined him in the Balla Hissaur of Caubul. Shauh Mahmood was dethroned by his half-brother Shujau, who spared his eyes, but imprisoned him in the Balla Hissaur. The Shauh Shujau in his turn lost his crown. After several vain attempts to recover it, he fled; was recalled by a Baurukzye noble, but again forfeited it by an ill-timed display of extreme vanity. His brother Eyoob (job) was made king in his stead, and was dispossessed of his kingdom by Dost Mahommed, who was dethroned by the British to make room for the thrice-rejected and un-popular Shauh Shujau, who at length fell, the victim of assassination, during the Caubul insurrection. His sons Futteh Jung and Shavhpoor reigned for a few days in succession, but were driven from the country to seek refuge at the hostile court of Lahore, whereupon the Afghaun Cromwell resumed the reins of government, and still continues to hold them.

The first time I saw Shauh Shujau was when he was on his march from his winter palace at Jellulabad to Caubul, his summer residence, attended by his court, the British mission, and the military. The whole of the troops were drawn out to welcome his Majesty’s return to his capital, and the wild grandeur of the whole pageantry baffles description. I was in the Chummun e Shauh, and over the narrow pass of the Seeah Sung mountains poured the picturesque and motley retinue from the Jellulabad route. Foremost, with bells suspended from their harness, ringing in time to their dreamy gait, appeared, with outstretched necks tasselled and ornamented, the dromedaries. There were hundreds of them bearing the swivel battery, each gun decorated with green and scarlet flags, which flapped round the savage-looking drivers, who, seated on the top, with beards, locks, and shaggy black hair caps, all pressed and matted together over their scarce human faces, rammed down irregular charges into their stunning jinjals or wallpieces, and fired them at random with hoarse whoops. Many a cavalier was in consequence nearly made a filed officer of – plumes were carried away, and whiskers singed, much to the delight of the unearthly marksmen. This deafening battery passing on, was closely followed by the royal stud, glistening in cloth of gold and jeweled housings, each steed led by hand. Then came the officers of the household, executioners, stave, sword, kettle-drum, and standard-bearers, in their many-horned and pointed scarlet caps, clearing the way by choking it up, restoring order by creating confusion. A clattering array of Afghaun horse succeeded them, beplumed and armed cap-a-pie, their kettle-drums beating, and their bossed and ornamented furniture jingling as they swept past, followed by a host of bare-legged, long-haired groom-boy runners. After them pranced a squadron of the Envoy’s body-guard, in blue and silver, and then － Majesty itself.

The Shauh was splendidly mounted, sat well and upright, and looked every inch of him the King. The imperial velvet hat, or crown (koollah), with the drooping leaves of emerald pendants branching from the upper part of it, encircled his high brow, which glistened in a band of costly gems. His dress was a tight-fitting purple satin tunic, embroidered in gold and precious stones, and from shoulder to wrist were bound armlets of massive plates of jewellery. Shagreen leather, pointed-toed and iron-heeled high boots, and a flat compact cashmere shawl girdle, from which was suspended a splendid Isfahaun scimitar, and in which his heavy dagger (peishkubs) rested, completed his attire. The Shauh was a man of great personal beauty, and so well got up, that none could have guessed his age: his complexion was a clear olive-brown; the character of his countenance was excessive hauteur, blended with melancholy; an expression which was increased tenfold by his regularly-marked eyebrows, long dark eyes, and beard of jettest black, the length and magnificence of which was a proverb. Descending from the ears in a broad mass, it swept, as he sat elect, over his jewelled pommel, and tapered off to a single hair. His Majesty addressed himself to Sir William Macnaghten, who rode slightly in rear of his right hand, in company with the Shauhzaudas (princes of the blood). They were followed by the Nizaumut Adowlut (pillars of state) and other great officers, the generals with their staffs, &c., with a picturesque train of personages in flowing turbans, cocked hats, sheep skins, helmets, skull caps, round hats, and chacoes. Bengal light, irregular, and Afghaun cavalry, hemmed in by the overwhelming masses always attendant on an Eastern camp, brought up the rear of this magnificent assemblage. As the royal train swept on through the narrow winding streets of Caubul, every doorway, window, and roof was crowded with spectators, eager to catch a sight of the Feringhee’s King, as they called him. The number of fair ones closely veiled, and drawn up in rows on the flat house-tops, like an endless living wall of shrouds, defies the pen of the describer. Neither they, nor the rougher sex, who were grouped about in the gay and picturesque costumes of their different clans, gave way to any expressions of pleasure or loyalty on the occasion, but, on the contrary, all looked on mute and dogged, counting their beads as they stood motionless, with arms crossed over their breasts. This silence was unbroken, save by some aged Moollah’s muttered prayer for the King, the hurried voice of a petitioner driven back in his attempts to reach the royal ear, the tramp of cavalry, and the shout of the officer proclaiming the power, excellence, and majesty of the Shauhee Douree Douraunee, Shauh of Shauhs, and pearl of the Douraunee dynasty. On reaching the palace, the whole cavalcade pulled up and dismounted, his Majesty descending from the saddle in slow and dignified fashion. Half borne along by the officers on whose shoulders he leant, he mounted the stairs leading to the throne-room, and then appeared at the Moorish arched windows above us, supported as before to his marble tukt, or throne. As he seated himself, automaton-like, his face formed into a set expression of extreme pride, cannot roared, the plumed cocked hats of Sir William and his staff were flourished to the dust in low obeisance, and the right arms of the military swept up to the salute; but these expressions of our loyalty received not the smallest return or acknowledgment. The half-closed eye wandered slightly over the representatives of the mighty British Empire, and at once the royal countenance resumed its haughty apathy. A long pause succeeded, and a slight gesture of impatience, perceptible in the movement of the hands, dismissed us from the sacred presence, not a little disgusted at what we in our ignorance thought a most ungracious reception.

The throne is said to be very ancient; it is composed of an octagonal block of white marble, raised on legs, with a step of the same material. When seated, the King can be seen by the Court in the square below. The arches and pillars of the window are of wood, carved and painted. The sides of the room are full of niches, which are embossed in various patterns on the glittering plaster; the ceiling is richly painted in flowers and scrolls.

What a terrible revolution had taken place when I visited Caubul a year afterwards! King, Envoy, Resident and politicals, Generals and army, all murdered － swept away: the palace of the proudest monarch in the world defiled by the presence of a military mess; the sacred throne － a lounge, a pitch-and-toss table; the arched windows now crowded by some of the very officers, smoking and chatting there, who had taken so humble a part in the ceremony of enthronement, and who stood beneath as little noticed by the haughty monarch as the ground whereon they trod. Even the Afghauns themselves had forgotten the former sanctity of the palace, for, as I sketched the interior, the Wuzzeer of the little Prince Shauhpoor (the youngest son of the late Shauh, whom we left behind as King), who was of the same tribe too as the royal house, stretched himself across the marble throne itself to listen to the fooleries of the court jester, who was capering about, and displaying his juggling antics for our amusement. In the picture he is represented sitting there. Shujau! Shujau! thy glory was indeed departed, when thus thy own tribe of Suddozye had so soon forgotten thee. The sceptre from thy house is too surely passed away for ever.

Gallery: First British Afghan War. Costumes and scenery of Afghanistan. The costumes of the various tribes, portraits of ladies of rank, celebrated princes and chiefs, views of the principal fortresses and cities, and interior of the cities and temples of Afghaunistaun. From original drawings by James Rattray and James Atkinson.