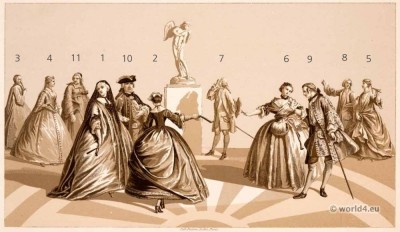 No. 1. Grande robe, after Watteau. This dress, with the enormously developed petticoat, represents the pannier at its greatest size. There had been panniers under the name of hoop or criarde in the last years of the reign of Louis XIV., hut it was not until 1716 or 1718, after the appearance of two English ladies at the Tuileries, that they look such a great extension. In this plate, taken from one of Parrocel’s pictures, the dress, falling from the shoulders without being drawn in at the waist, envelops the whole body; it is merely half open at the corsage, just disclosing the bows of ribbon of the corset.

2. Tight-fitting dress, with the petticoat looped upon a pannier à entonnoir covered with a shirt à campagne d’argent; black leather shoes; taken from the same picture.

4. Dress with a low body, tightly laced, plaited behind; after Bernard Picart.

5· Tightly-laced dress, plaited behind; after Bernard Picart. Until about 1750 women’s heed-dresses were low, consisting, for the most part, of a small lace cap with flaps on each side and coming to a point upon the forehead, or as in No.2, where the flaps are folded back upon the coif. – N. B. To observe, in figure No.3, the coqueluchon then called bagnolette and afterwards the Thérèse; the gloves extend up to the elbow, held by the fontage, as may be seen in No. 1.
6. Lady in winter dress trimmed with fur and in falbala, with muff and mantilla. toilette known as the négligé apparent; after Boucher.

7. 8. 9. Men’s dress underwent little change during the first half of the century. No.7 shows the coat Justaucorps, which was or first plain and with loose skirts, the cravat being also while. In 1725 the skirts of the coat were bouillonnés, so as to make them act as a pannier. This was effected by making five or six folds distended by paper or horsehair, and by the black ribbon worn round the neck, which gave rise to the frill which took the place of the former cravat. The wig was mostly worn, the hat being carried under the arm and serving to set off the carriage. The first illustration is after Bernard Picart, and the second after Lancret.
10. Colonel of the Swiss guard; after Parrocel.