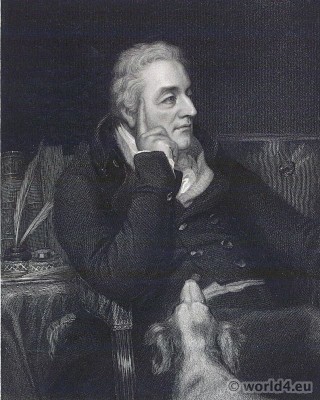 As a young man Wyndham was a playboy and had numerous affairs, including with Elizabeth Lamb. Especially known however, he was a patron, especially by William Turner. In 1802 he acquired a first paintings of Turner, which is known as Egremont Seapiece today. In the following years he acquired more images Turners, who was often a guest in Petworth House. Although with increasing age politically conservative, Wyndham was a close friend of the Whig opposition leader Charles James Fox and paid a portion of his gambling debts. Wyndham himself was politically not very active and rarely attended the meetings of the House of Lords. Wyndham was considered extremely generous and charitable. He supported the construction of hospitals, schools and the town hall of Petworth. He even put little value on status and titles, and often invited to eat simple peasant in his mansion one. For the people around Petworth he organized a grand celebration in his park, during which the largest in May 1834 6.000 people were boarded. The title Earl of Egremont inherited by his nephew George Francis Wyndham, but died without male heirs of 1845, so the title became extinct.

Note:  An Appreciation of the work of Ann Macbeth.