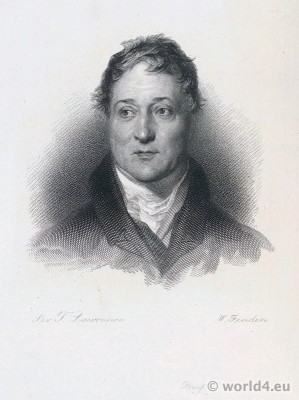 The events of the French Revolution aroused his interest in politics. Huskisson was a member of the “Club of 1789”, whose members a transformation of France into a constitutional monarchy advocated. He became known as the first prominent deaths in a train accident when he was hit by the locomotive The Rocket and a few hours later succumbed to his injuries. On August 29, 1790, he delivered a widely acclaimed speech on the issue of assignats by the French government, which earned him the reputation of being a financial expert. From 1790 to 1792 he worked for the Marquess of Stafford, the then British Ambassador, and returned with him to London. In the UK, Huskisson soon received the support of two other influential politicians, Interior Minister Henry Dundas and Prime Minister William Pitt the Younger. Since Huskisson spoke fluent French, commissioned him Dundas in January 1793 with the enforcement of the Alien Act, which concerned mainly French refugees.

Note:  Portrait of George IV as Prince of Wales.