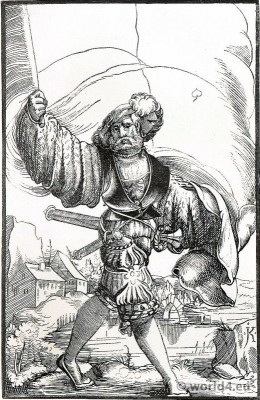 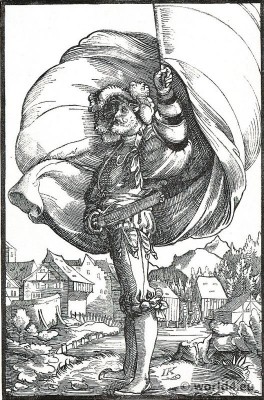 These two pieces are drawn from the remarkable volume called the Arms of the Holy-Empire, which was published at Frankfurt on the Mein, in 1545, at Cyriac Jacob´s (infolio).
That book presents a series of 144 wood-cuts representing Landsknechte (lansquenets) of the time of Charles V., in the most picturesque and varied attitudes and costumes. They all hold the standards with the coasts of arms of the imperial towns, and are thrown out by landscape back-grounds. It is useless to call the attention of purr readers on the grand character of these figures.
We shall follow Mr. Bryan´s opinion, who, in his “biographical and critical Dictionary,” attributes the monogram of every plate to the German engraver Jones James Kobel, who flourished towards 1520.