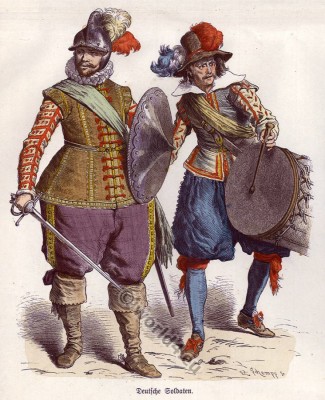 Baroque 17th century, Thirty Years’ War. German mercenaries with sword and shield, drummer.
The cut of the costume is still influenced by the Spanish fashion. The soldier left in the picture, in hand a rapier, with padded doublet (shoulder, chest), Camisole, and Spanish collar, stuffed harem pants, gauntlets and boots with heel spurs.

The drummer is wearing a felt hat with feathers. The stockings are held by colored ribbons, to he wears buckled shoes with heels. The sleeves are slotted with strips of cloth decorated in the manner of the early mercenaries. The fashion shows clear influences of the loose and liberal Dutch fashion. The waist is moved further to the above, the doublet longer. The padding is less, the pants go over the knee down. The sash refers to the time of the Thirty Years’ War.