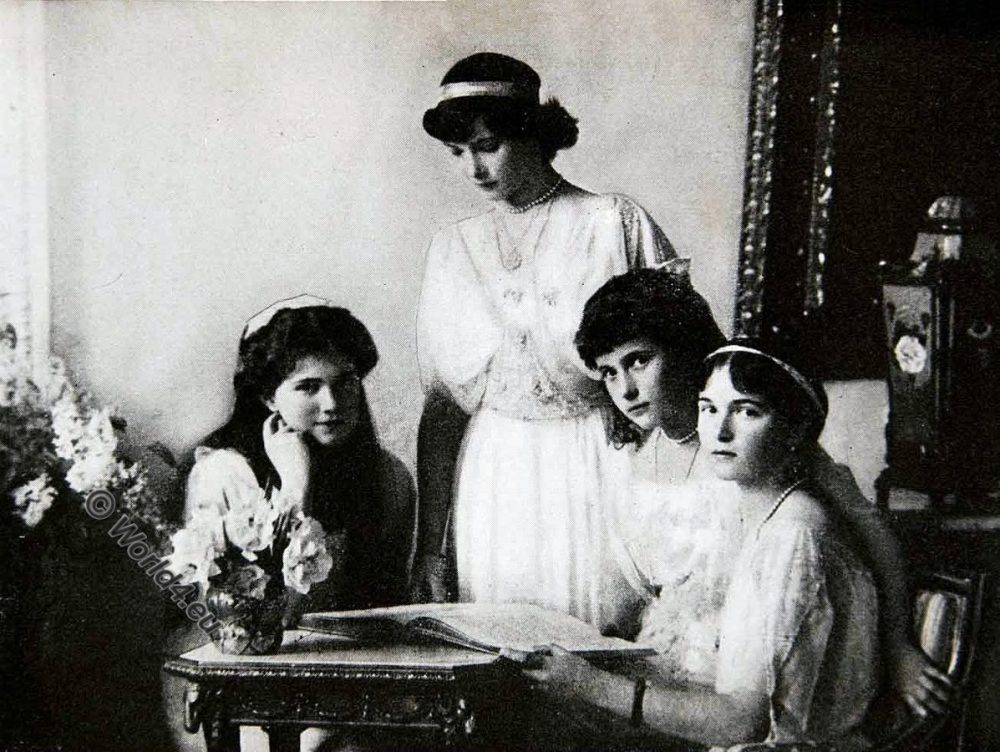 The four Grand Duchesses, photographed about 1914.

From left to right: Maria, Tatjana, Anastasia, Olga. In 1918, at the time of their assassination, Olga was twenty-two years old, Tatiana just past twenty-one, Maria nineteen, Anastasia seventeen.

Olga was the first child of the Russian tsar family. Already at the age of twelve months she traveled with her parents to Balmoral Castle, where they visited Victoria.
Olga spent most of her youth with her family in Zarskoe Selo. There she was taught in history, geography, mathematics, English, French, music and painting, as is the case with great princesses. The Czar’s Daughters were especially distinguished by her great talent on the piano and her excellent memory. She painted, wrote poems, was known for her empathy and her willingness to help, but also for her temperament and her directness.

During the First World War, Olga, as well as the mother, worked with her sister Tatyana and the court lady of the Empress, Anna Vyrubova, as a nurse for the Russian Red Cross, and provided soldiers in hospitals.

Grand Duchess Tatyana Nikolaevna of Russia (born at June 10th, 1897 in Tsarskoye Selo, died July 17th, 1918 near Ekaterinburg) was the second daughter of Nikolaus II of Russia and Alexandra Fyodorovna.

Tatyana Nikolaevna received her first name after the figure of the Tatyana from Alexander Pushkin’s work Eugene Onegin. Like her older sister Olga, she was a good student. She liked to work with handwork, piano playing and lyric. Like her mother, she was strongly religious and shared her interest in fashion.

She is described as a cheerful, introverted and willing girl who liked to draw. A special joy were her conversations with simple people and young officers. Lord Louis Mountbatten, Earl of Burma, called “Dickie” in the family, a cousin of the girls, had a youthful image of Mary standing beside his bed until his death. She was 19 when she was shot with her family at Villa Ipatyev near Ekaterinburg on the night of July 17, 1918

Grand Duchess Anastasia of Russia (Anastasia Nikolaevna Romanova, Russian Великая Княжна Анастасия Николаевна, born 18 June 1901 in Peterhof, died July 17, 1918 in Ekaterinburg) was the youngest daughter of the last Russian imperial couple. Despite later legends has been proven since 2007 that she was murdered along with the entire family by the Bolsheviks.

Anastasia was fearless and seldom cried, liked to play pranks and had a great actorial talent. She liked imitating other people and thus enjoyed her surroundings. Although she was a Grand Duchess of Russia, she slept, as well as her siblings, on camp beds and had to take a cold bath every morning.

She had an intimate relationship with her younger brother Alexei. If it was not good for him because of his illness, it was usually only Anastasia to distract her brother from the pain and to cheer him a little. She also had a close bond with her older sister, Maria, and they were known as a “little couple”.

In the time of captivity in Tobolsk and Ekaterinburg, the girls tried to preserve their gaiety, and this Anastasia and Maria managed best. Even the soldiers entered Anastasia’s jokes.

In 2000, Anastasia and her family were sanctioned by the Russian Orthodox Church.