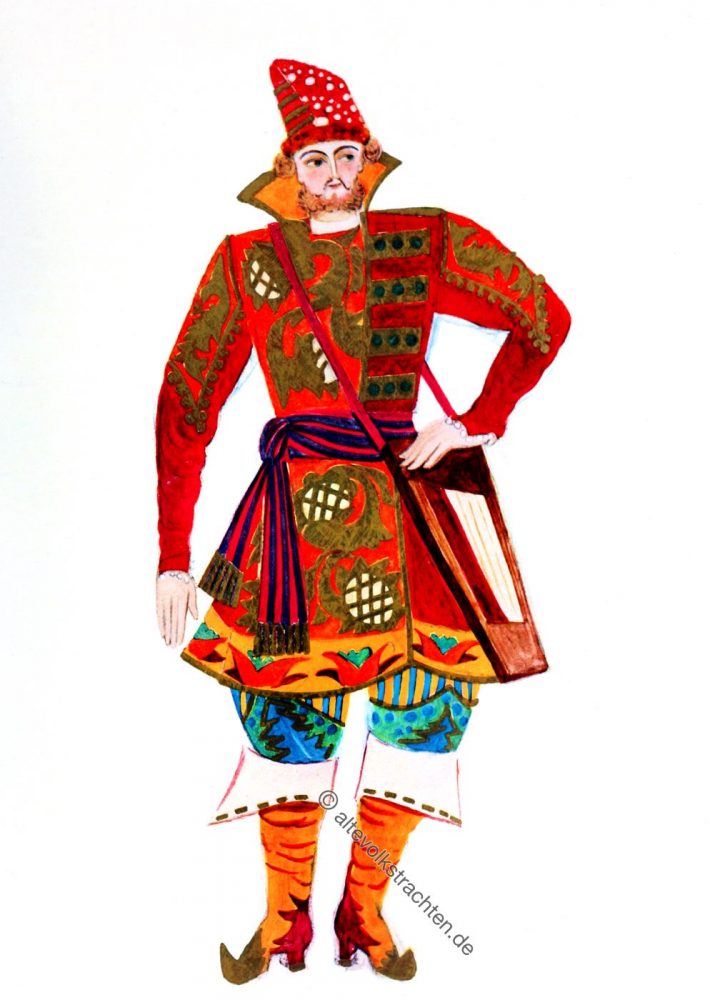 Sadko is an opera byline (Opera-bylina) in seven pictures by Nikolai Andreyevich Rimsky-Korsakov, which premiered on January 7, 1898 at the Solodovnikov Theatre in Moscow. The plot is based on the medieval Russian folk tale of the fairy-tale experiences of the musician and later merchant Sadko, whose real role model is said to have lived in the 12th century.

Rimsky-Korsakov was early concerned with the material of the old Russian folk tale from the Byline treasure. His orchestral work Sadko, a sound painting for orchestra bears the opus number 5 and dates from 1867; the composer revised it twice and also incorporated some elements from this work into the opera of the same name.

Despite its musical beauty and popular melodies, Sadko is rarely performed. In 1906 it was shown at the Bolshoi Theatre in Moscow. The first performance in the United States followed on January 25, 1930 at the Metropolitan Opera. The London premiere took place in June 1931. A performance at the Berlin State Opera in 1947 attracted greater attention.

The “Song of the Indian Guest” (Песня Индийского гостя гостя) formed the base of numerous arrangements, among them Fritz Kreisler’s Chanson indoue for violin and piano (1919). An English text version entitled Song of India, which was first published in 1921 and was soon known through recordings by Paul Whiteman, Tommy Dorsey and Bunny Berigan, was to become particularly popular.

AFTER A PAINTING (IN THE COLLECTION OF M. ZETLIN, PARIS), BY NATALYA GONCHAROVA. DESIGN FOR THE COSTUME WORN BV SADKO IN THE RUSSIAN BALLET, PERFORMED IN THE UNITED STATES, I916.

Research and preparation have always played a major role in Goncharova’s work. She visited museums, studied costumes, design and architecture and discussed with the farmers who gave her such important motifs.

Goncharova was born as the daughter of an architect and grew up in her grandmother’s house. In Moscow she attended the high school for girls, from 1898 she studied sculpture at the Moscow Academy of Painting, Sculpture and Architecture. There she met the painter Mikhail Larionov. Larionov encouraged her to give up her studies of sculpture to study painting. The two entered into a love relationship, Larionov remained Goncharova’s companion and colleague all her life.

In 1906 she showed her works for the first time in Western countries on the occasion of the Paris Salon d’Automne. Together with Mikhail Larionov, she participated in a number of other exhibitions abroad in the years before the First World War, including the Blauer Reiter in Munich in 1912 and the First German Autumn Salon in Berlin in 1913.

Goncharova was an expert in icon painting and Russian folk art, in which the Lubki played an important role. She now introduced the styles of these genres into her paintings and developed the neoprimitivist style of the Russian avant-garde. Provocatively, she distanced herself from Western art. Parallel to her work with neoprimitivist images, she experimented with Cubofuturism and Rayonism, whose concept she developed together with Larionov. In addition, like Larionov, she maintained close contacts with the literary scene of the Russian avant-garde. Goncharova illustrated various books by Russian futurists.

Together with the brothers David and Vladimir Burliuk, Michael Larionov and Kasimir Malevich, Natalya Goncharova was a strong exponent of neoprimitivism, a renewal movement of Russian culture whose source was folk art, and which manifested itself particularly impressively in literature and music, for example with Igor Stravinsky.

In 1916, together with Sergei Diaghilev and Larionov, she made a trip to Spain, during which she developed a fascination for Spanish women in magnificent dresses and robes. Spaniards should be her favorite topic after the trip for a while.

Natalya Goncharova was a grandniece of Natalya Nikolaevna Pushkina-Lanskaya, née Goncharova, the wife of Alexander Pushkin. In 2007 her painting Apple Harvest was auctioned at Christie’s for £4.948 million, or about $10 million. In June 2008 another of her paintings, the still life Flowers from 1912, was also sold at Christie’s in London for $10.8 million.