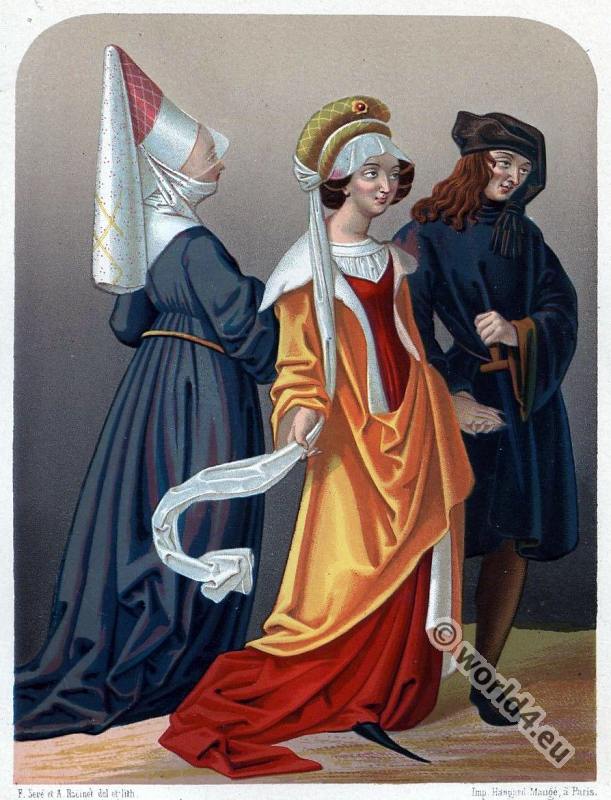 The Hennin. Headdresses of the 15th century.

The HENNIN, sometimes referred to as the CORNET, was a high steeple cap, like a candle extinguisher. It first appeared in France about 1428 (Fig. 619 1), and was made of a stiffened fabric covered with a rich material, and worn tilted back on the head, its upper surface at an angle of about forty-five degrees to the vertical. The hair was entirely concealed, being drawn back and covered by the hennin. 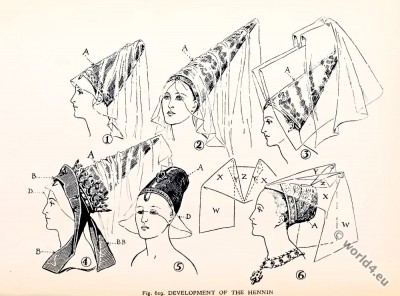 Over the hennin was placed a circular veil, draped in such a manner that its edge came just above the eyes, the greater part falling behind the head.
It was this early type of hennin which inspired Friar Thomas Conecte of the Carmelite Order, in 1428, to pungent invective against “the noble ladies, and all others who dressed their heads in so ridiculous a manner, and who expended such large sums on the luxuries of apparel.” Not content with abuse, he incited rude street boys to pursue with jeers fashionable women and to pull down these monstrous headdresses, wherefore the poor things had to seek shelter while their servants dealt faithfully with the offenders. For a time, to avoid further disturbances, hennins were laid aside. (This same zealous friar devised a plan of dividing the men and women who came to hear his sermons by a cord, “for he said he had observed some sly doings between them while he was preaching.” He was burned for heresy in Rome, 1432.) “But this reform lasted not long, for like as snails, when any one passes by them, draw in their horns, and when all danger seems over put them forth again—so these ladies, shortly after the preacher had quitted their country, forgetful of his doctrine and abuse, began to resume their former colossal headdresses, and wore them even higher than before.”
About 1440, a much higher version of the hennin was worn by noble ladies of France. The higher the rank of the wearer, the higher the hennin; some were as much as forty-five inches from base to point. The circular veil also increased in size, and was usually caught up with a jewel at a point in the centre of the forehead (Fig. 619 (2) . 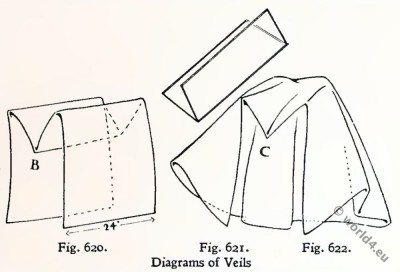 The latest fashion at the French Court, about 1450, was to cover the hennin with two rectangular veils of gauze or fine linen, edged and embroidered, and stiffened into angular folds as shown in Fig. 619 (3). These very transparent veils, when worn over hennins of rich gold or silver brocade, had a wonderful effect. The headdresses allowed no hair to be seen, except a small ring or loop in the centre of the forehead, designed to show the colour of the hair. Ladies of fashion of this period were convinced that their ideal of a spotless alabaster-like complexion was best realised by concealing the hair, and having their faces slightly veiled.
At this date, 1450, the hennin with double veil was adopted for full dress by English noble ladies. The first veil, Fig. 620, measuring about fifty-six by twenty-four inches, was attached at b to the hennin’s edge at the centre of the forehead, and it was necessary to have an invisible wire frame, Fig. 621, fixed along the top of the hennin at A, Fig. 619 (3). The second veil, Fig. 622, was semicircular, about fifty-six inches in diameter. It was folded as shown, and its centre point c was attached to the hennin, through the first veil, about half-way along its upper surface. The circular portion of the veil hung in folds at the back of the headdress.

About 1460 the hennin was made of brilliantly coloured silk, or of gold or silver tissue. The current fashion was to put it on in the following manner:
1 . All the hair was drawn back off the face and twisted into a chignon on the crown of the head.
2. Over this was placed a piece of very fine and delicate white lawn (Fig. 619 (4) ), shaped so as to form a shade or frame for the face (D). It was firmly fixed to the hair by pins.
3. On top of this was set a long strip of double velvet, b, always black, about five inches wide by thirty inches long. It was placed round the head as shown, and the inner edge was attached to the hennin, save at the back quarter, to which another piece of black velvet, B, was attached and hung from the centre of the hennin down the wearer’s back. The front part of the velvet band b was turned back at the top to form a point and so fixed with a jewel. A jewelled pin was often used to fasten one or both of the side pieces of the black velvet band to the hennin. Finally, 4. A voluminous rectangular veil (about five feet by ten or twelve feet) was thrown over the top of the hennin, a few inches being allowed to hang beyond the point.

Royal and noble ladies wore their coronets around the base of the hennin, just behind the black velvet band. The hennin was very rarely worn with the wimple, except in the case of old ladies and widows (see Widows and their Weeds, p. 191).
A simpler kind of hennin is seen in Fig. 619 (5). Its use became very general in England about 1470, when fashionable women decided to dispense with the cumbrous headdresses lately in vogue. The tall hennin had been abandoned in France at an earlier date. In shape this new type of hennin was either cylindrical or a truncated cone; it was made of silk or velvet on a soft foundation, and had a band of embroidery at the bottom edge and a jewelled ornament in front towards the top. A circular transparent veil (D) was often worn on the head under this hennin.
About 1470 more hair was allowed to be seen, and the fashion of the pretentious hennin approached its end. A headdress introduced about 1470 and known as the BUTTERFLY was in general use for the remainder of the reign of Edward IV. and during that of Richard III. It is seen in Fig. 619 (6).

It is a reduced version of the last, Fig. 619 (5), in shape very like a flower-pot. It was made usually in silk heavily embroidered in gold, and worn very much at the back of the head, the hair being drawn back under it. This cap was sometimes worn alone, but usually a veil of stiffened gauze was used with it, oblong in shape and measuring about seventy by fifteen inches. A series of zigzag foldings gave it the form seen in the diagram Fig. 623 and drawing, and to support it two gold wires were attached to the top of the cap as shown, and the veil evidently pinned to the hair in front. Noble ladies wore their coronets above the flat centre portion of the veil (Z), and illuminated MSS. show Queen Anne, wife of Richard III., wearing this cap and veil, surmounted by the royal crown matrimonial.

Note:  Cotehardie and houpelande in the 15th century. Middle Ages.

Fig. 623 explains the folding of this veil, and its lettering, WXYZ, is the same as in Fig. 619 (6) and its diagram. More hair than formerly was seen, as a consequence of the cap being worn so far back on the head. The hair was brushed right off the forehead, and its ends confined inside the cap. High foreheads were in favour, and to attain this end ladies of fashion to whom Nature had been unkind remedied the defect by plucking out their forelocks by the roots.