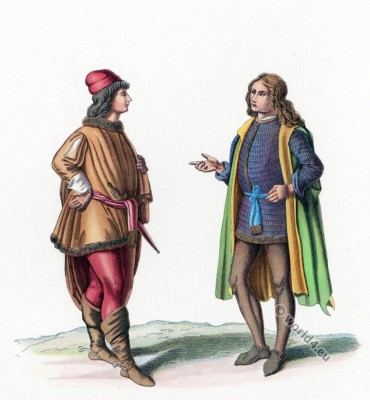 Italian costumes from the second half of the 15th century. Drawn by Johann Michael Wittmer, history painter, 1828 in Rome.
The figure to the left is taken from a painting that Maria represents, surrounded by several saints, in the Church of Sts. Dominica to Siena. The figure provides an Italian nobleman, the donor of the painting is and so after a portrait. Among the paintings, the words are: Opus Matei di Seins (da Siena) MCCCCLXXVIII.
The young posh Italian to the right is taken from a fresco, which is in the Church of St. Katharina to Assisi.