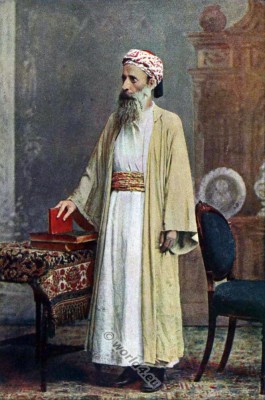 The subject of this picture is a Jewish priest from Bagdad. There are a considerable number of Jews in Bombay, and the richest family in all India, The Sassoon, are Bagdad Jews, who established their mercantile firm in Bombay more than half a century ago. They are immensely rich, and their generosity in the matter of donations towards embellishing the city is well known.
Sir Albert Sassoon*, who was the head of the firm until his death in October 1896, left Bombay about twenty-five years ago, and settled in Brighton, where he passed his time in comparative retirement.

His father, the late Mr. David Sassoon, was long established as a merchant in Bagdad, and his ancestors before him. At one time he occupied an important financial position under the Turkish Government, but was driven from his native town by pestilence in 1834, and first migrated to Bushire, afterwards establishing himself in Bombay. Here the trade between this city and Bagdad was greatly fostered, and it is due to his influence, in conjunction with that of the Ezras, the Gubbays, and other Jewish families, that the business between India and Mesopotamia is now financed in Bombay. Their operations have extended to the Persian Gulf, to the interior of Persia, to China, and even to Japan.

To give instances of some of the many benefactions made by the Sassoon family, it may be mentioned that large sums of money were devoted towards constructing the Sassoon Hospital and the Industrial Almshouse at Poona, the Reformatory at Bombay and the Clock Tower at the Victoria Gardens, and many contributions made to the Sailors’ Home at Bombay and at Hongkong. Over £ 12,000 were given towards the Mechanics’ Institute in the former city, and this institution can now boast of a library which is second only to the Bombay branch of the Royal Asiatic Society’s Library. The Sassoon Dock at Lower Colaba was the first wet dock in Western India, and its construction is said to have led the Government of Bombay to promote the construction of the large Prince’s Dock, without which the ever growing imports and exports of the Presidency could not well be carried on.
Sir Albert Sassoon had the honor of Knighthood conferred upon him, and in the same year the Corporation of London presented him with the Freedom of the City, a distinction which was the first of its kind ever bestowed on a foreigner.

(*David Sassoon & Co. , which – especially since the Treaty of Nanking in 1842 – in China, was active and in the following years mainly through opium trade its owners should bring legendary wealth . Albert Abdullah David Sassoon was the Oriental Jewish (Sephardic) family traditions and largely took over the British customs and traditions. Also the first name Albert was only subsequently accepted as part of this process of assimilation. 1867 Albert Sassoon was admitted to the Order of the Star of India, 1872 Finally made ​​a Knight of the Order of the Bath. A little later, he moved permanently to England, where in 1890 he became a baronet raised. He died in 1896 in Brighton.)