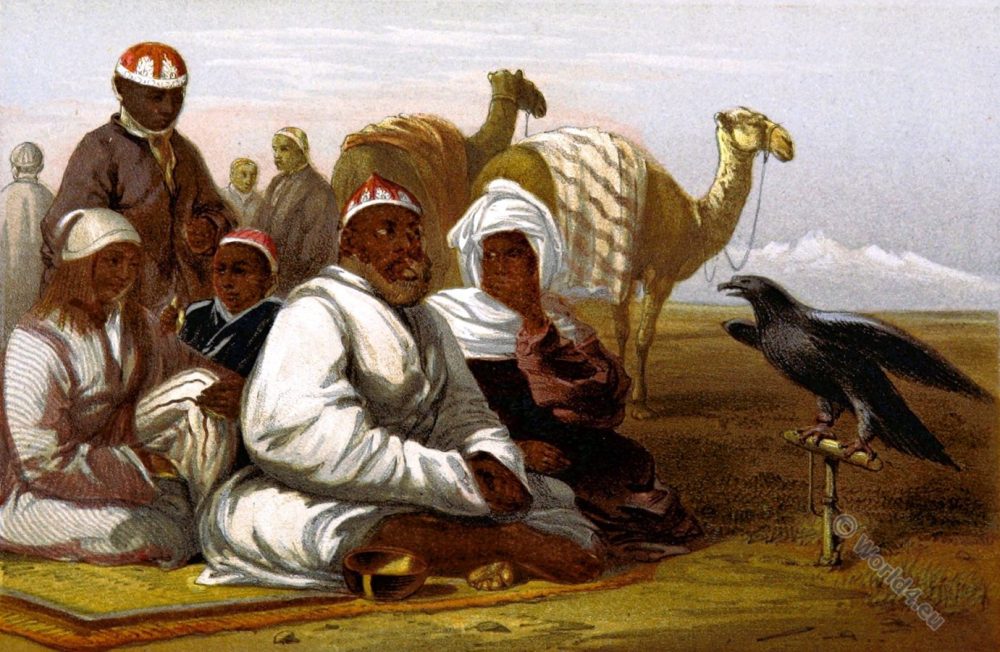 Source: Oriental and Western Siberia; a narrative of seven years’ explorations and adventures in Siberia, Mongolia, the Kirghis Steppes, Chinese Tartary, and part of Central Asia
by Thomas Witlam Atkinson and Lucy Atkinson. With a map and numerous illustrations.

Excerpt from the book:

Baron Humboldt has stated that a volcano exists on an island in the Ala-kool,— so the Baron had been informed by Tartar merchants who cross the Steppe Avith the caravans. But no volcano has ever been in action in this region; the one nearest to this place, is that shown on my map in the Gobi Desert, and Pe-shan in the Syan-shan. In all my wanderings in the Karatou, Alatou, and Actou, I did not discover one crater.

We now turned toward the west, in search of the aoul of Sultan Beck — the largest man and most wealthy Kirghis in the Steppes. He has ten thousand horses, and camels, oxen, and sheep, in proportion to this vast herd. It was late in the evening when we found him: perhaps we disturbed his slumbers, and by so doing ruffled his temper, as he was exceedingly uncivil, and sent us a sheep that was diseased.

This was quickly returned to him with my compliments and a message stating that we did not eat such food, nor did we require anything from him. I desired the Cossack to say that he was the first Sultan who had behaved so ungentlemanly towards me, and that, notwithstanding his large body, he had the heart of a mouse. This roused him into a fury, and he ordered us away, threatening that if we did not move instantly, his men should drive us into the lake.

After- spending more than two hours in the company of the Sultan and his bard, we separated on friendly terms. Next morning before starting I sketched Sultan Beck and his family. He is feeding his bearcoote—hunting with the king of birds being his favourite sport. Early in the forenoon I said Aman-bul and departed, attended by ten of the Sultan’s men: good horses had also been provided.

From this aoul our route was in a south-westerly direction, about twenty versts from the foot of the Karatou, a chain of mountains rising abruptly from the Steppe. They are composed chiefly of a dark purple slate, are destitute of vegetation, and in no part rise to more than six thousand feet; but there are several magnificent gorges here, through Avhich the rivers find their way to the Steppe. Again we had to ride over a sandy plain, stretching westward to the shores of the Lake Tengiz; and after a two days’ journey found the Kirghis more numerous. Their aouls and dwellings resemble each other so much, that it would be repetition to describe them.