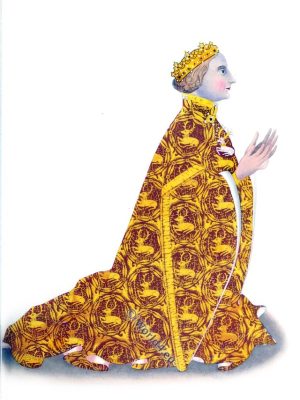 PERHAPS no monarch under the same circumstances ever enjoyed so great a share of the sympathy of posterity, as the ill-fated, though at the same time (it must be confessed) ill-deserving Richard II.

This is perhaps to be attributed in a great measure to the mystery which involved his last moments. Brought to a throne almost in his infancy, this weak prince had been led away by the vanities and luxuries which were thus placed in his grasp, before he had learnt to estimate the duties belonging to a crown.

During his reign, the kingdom was governed by favourites of the most unworthy character; on the eve of a mighty revolution in the minds of his countrymen, the king was urged by his own inclination and by the evil counsels of his favourites, to increase the number of abuses; while the kingdom was ruled in a disgraceful and inglorious manner, the people were loaded with new taxes to support the extravagance of the royal household; and, as a finishing stroke to the general dissatisfaction, the favourites alienated from the king the hearts of the nobility.
Such were the causes which led to the tragical termination of Richard’s reign, a period which is popularly famous as the age of Jack Straw and Wat Tyler; in religious history, it is connected with the name of the reformer Wycliffe; and in literature it boasts of the name of Geoffrey Chaucer; it also furnished to the ballad-singers of after ages the subject of the never-to-be-forgotten rhymes of Chevy Chase.

There are preserved two original paintings of King Richard II. of which the most curious is the one represented in our plate, and preserved at Wilton House, the seat of the Earl of Pembroke. It is a small piece, consisting of two tablets, on which are represented the king kneeling, accompanied by his patron saints, John the Baptist, St. Edmund the King, and Edward the Confessor, before the Virgin and Child, attended by angels.

Note:  Old Age and Poverty from famous The Romance of the Rose.

The date of this painting (which is protected by a glass covering it), is stated to be 1377, and it has been cited as a specimen of painting in oil previous to the supposed invention of that art, in 1410, by John ab Eyck. On closely examining it, however, it appears to be merely executed in distemper, and washed with some kind of varnish which has given it somewhat the appearance of oil. It is painted on a bright golden ground, and the colours are extremely fresh. An engraving was made from it by Hollar.

Our Initial Letter is taken from a handsome manuscript in the British Museum, MS. Sloane, No. 2435, written early in the fourteenth century, or perhaps at the end of the thirteenth. In the original it begins the chapter of an old medical book which treats on the diet and dress proper to each of the four seasons of the year. The four compartments of the letter represent the manner of dressing in each season.

The first compartment shows the costume proper for spring, where a light robe is thrown over the tunic, of such make and materials as to be neither too hot nor too cold, according to the prescription of the writer, “En printens doit-on ester bien vestu de robes ki ne soient ne trop caudes ne trop froides, si con de tyretaines de dras de coton. forre d’aigniaus.”

In autumn the same dress is recommended as in spring, but the outer garment is here left loose and open, and the cloth is recommended to be a little colder;— “A la Septembresce doit-on estre vestus a le maniere dou printens, mais que li drap soient un po plus caut.”

The cut below is taken from MS. Harl. No. 2897, of the latter half of the fourteenth century. 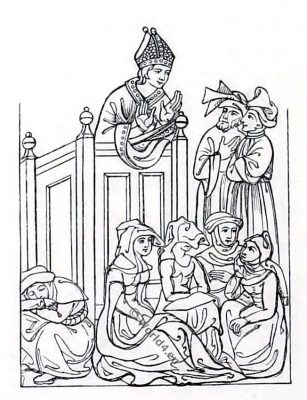