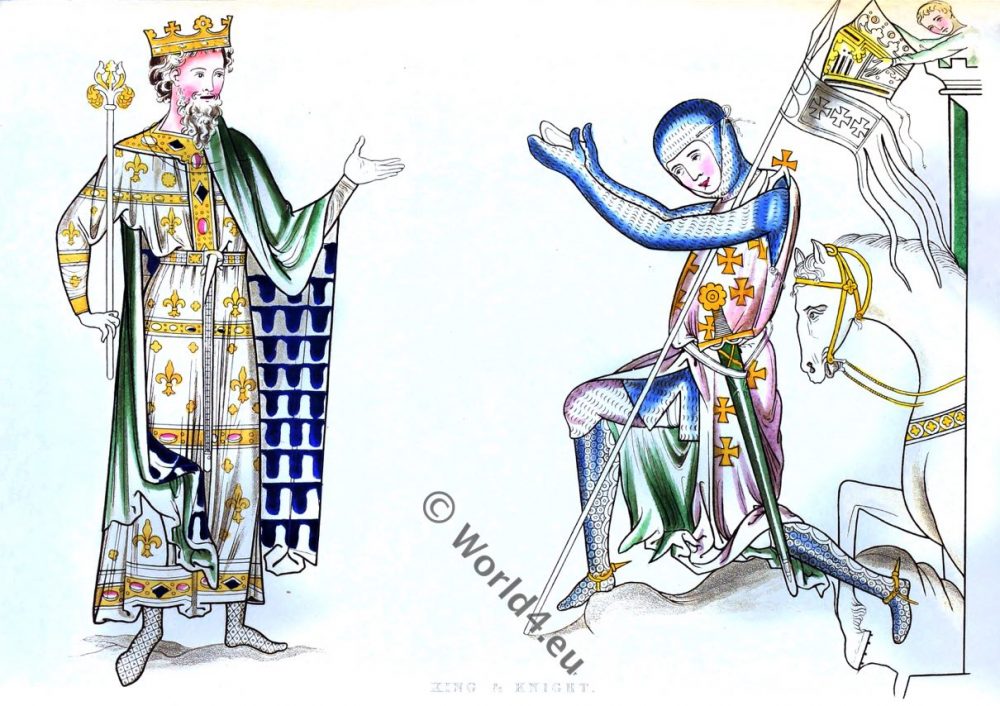 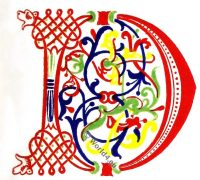 DRESSES of ceremony for solemn occasions, particularly with persons in exalted stations, suffer fewer changes in the course of time, than those in common use. Our plate represents a king- of the latter end of the twelfth century, dressed in his robes of state; but we may probably take it as a good example of the regal costume during the twelfth and thirteenth centuries.

Both the figures on the plate are taken from MS. Reg. 2 A. XX. The dress of the king in this drawing bears a close resemblance to that presented in the monumental effigies of this period. He is clad in the long dalmatica (or tunic), and the royal mantle; the latter thrown back loosely on the shoulders to exhibit the richness of the undergarment, with its jewelled collar and girdle. The dalmatica is here ornamented with fleurs-de-lis.

The dress and armour of the knight underwent much more frequent variations than those of the king. The one before us exhibits all the characteristics of a warrior of the age of Richard I.; and the crosses seem to show that he was a crusader. He is dressed in a coat and hood of mail; and wears over it a surcoat, probably of silk, ornamented with crosses.

This latter article of dress first makes its appearance about this time, and is supposed to have been brought from the east, its primary use having been to hinder the armour from being too much heated by the sun’s rays in a hot climate.

His legs are clad in the chausses, and the spur, a simple spike, is attached by a single strap of leather, and a buckle. Beneath the coat of mail, we see, over the chausses, the chausson, or breeches, an article of the knight’s dress which is less frequently represented in the old pictures. Even the ailet on the knight’s shoulder has here the form of a cross. The helmet, which appears to be held by his armour-bearer, is also of that flat-topped cylindrical form which came into fashion in the reign of Richard I.

The ventail, or aventaille, a moveable grating which protected the face in the hour of combat, is here represented as closed. At the period to which this figure belongs, the ventail was fixed by a hinge on one side and a pin on the other, and opened exactly in the same manner as a wicket; and as the hinge was moveable, it might be taken off at pleasure. 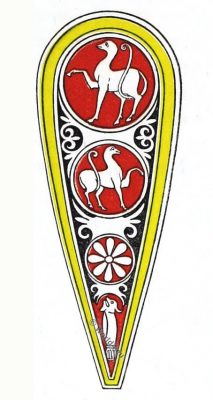 The shield of the knight is not given in the picture, but on this and the preceding page we give two shields from other sources. The first shield is taken from a MS. of the twelfth century, in the Royal Library at Paris; and is of that narrow kite-like form which prevailed from the time of the Norman conquest till at least the reign of Henry II. of England.

The form of the shield then underwent a gradual change very similar to that experienced by the gothic window at a later period; the bow became wider and wider, and the arch flatter, until at last it took the form which is still given to it in coats of arms.

The shield at the bottom of the present page is copied from a sculpture on the portal of the cathedral of Notre Dame at Chartres, executed in the twelfth century, and is much broader in shape, than the example given above. 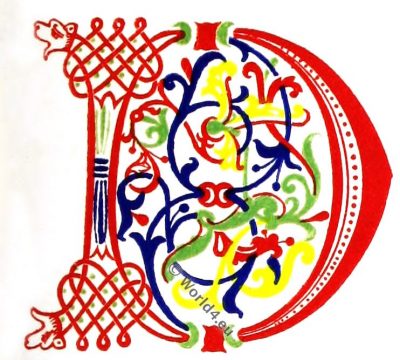 The Initial Letter is taken from MS. Arundel, No. 91 (in the British Museum), and belongs to the same period as the King and Knight. 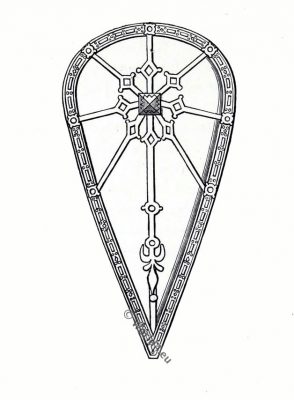