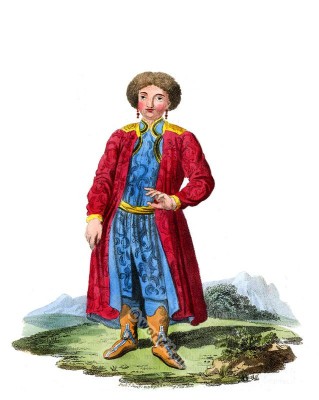 IN the province of Krasnojarsk, on the banks of the Yenessei, and of several rivers enriching that great stream, are to be found a tribe of Tartars called Katschintzki. Their country is mountainous, but fertile. They were in quiet possession of this spot, long before it was discovered by the Russians. They consider themselves of Tartar origin, and it must be confessed that they resemble the Tartars much more than the Mongols. Their meagre complex-ion is common to both these tribes; but their language is mixed with so many expressions purely Mongol, that it is scarcely possible to question their ancient affinity with that nation. They still possess an order of nobility, out of which each tribe elects its chief. Accustomed, in all seasons, to a wandering life, in winter they cover their huts with felt, and in summer with the bark of the beech tree. Their household furniture and utensils are nearly as wretched as those of the hordes we have already mentioned; and their want of cleanliness cannot possibly be surpassed by any nation whatever. Some of them sow a little barley and other grain; others breed horses and cattle; but their principal occupations are hunting and fishing. They have no fixed hours for their meals, but are entirely regulated by want, opportunity, and caprice. Their children contract, in their very infancy, the habit of smoking; and so passionately fond are the Katschintzians of tobacco, that they cannot be said to be really wretched, while they possess a store of that intoxicating herb.
The Katschintzians are at liberty to take as many wives as they are able to purchase and maintain; but the greater part are contented with four. The acceptance or refusal of a pipe, by the father of the female, is a signal of his agreeing to, or dissenting from, the union. The price of a wife is from five to fifty oxen; but the poorer sort, who have nothing but their persons to offer, place themselves for a few years in the service of their intended father-in-law. If, (luring this state of servitude, his mistress should happen to die, he is then at liberty to marry her sister, and his former services arc placed to the credit of the new account. But should the nymph be an only daughter, or her sisters already married, the unfortunate youth, in that case, loses all the fruits of his past labour. When the lover dies first, his father immediately succeeds him, and takes to himself the bride destined for his son. Their marriage festivals, besides singing and dancing, are accompanied with horse-races; and it is customary for the bridegroom to distribute prizes among the victors. The husband who happens to be dissatisfied with his wife, is at liberty to put her away; but he is obliged to maintain the children born during their union, and forfeits the oxen paid to obtain her. The men wear no linen: their outer garment consists of a coarse cloth manufactured by their wives, or of the skins of horses, sheep, or the wild goat.