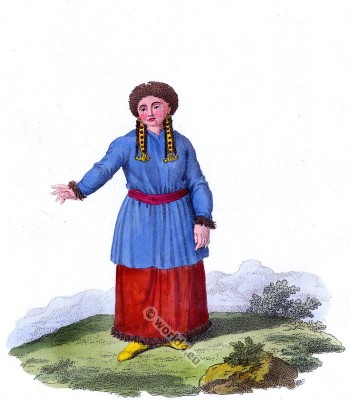 A Tartar Girl of Kusnezk.

THE dress of the Teleutans is not less miserable than their mode of living. Their women, however, sometimes wear garments of silk, and decorate their ears with rings and small chains. The hair is divided into two or more braids, and ornamented with ribbons, small shells, and various other embellishments. The women, married as well as single, arc in the habit of wearing a cap trimmed with beads and small medals, over which they wear a flat bonnet trimmed with a border of fur.
The price of a wife is as low as from ten to thirty horses, and the woman generally brings her husband a dowry nearly equal to the purchase; notwithstanding which, a Teleutans seldom takes to himself more than one wife. It is customary for the father of the bride to keep her at his own house for the space of two or three years after the marriage; but during this time she lives with her husband, and both are under the obligation of labouring for the benefit of their father.
More than half the Teleutans still follow the religion of the Shamans A few Christian families are to be found living together in villages; the rest are scattered among the Pagans, and are permitted to enjoy their faith, with-out the slightest reproach for having abandoned the worship of their fore-fathers. But of all the religious denominations into which the Teleutans are divided, the disciples of Mahomet are not only the richest, but the most exemplary in their manners, the most cleanly in their persons, and the best provided for: they are supplied with mosques, public schools, and priests. The followers of Shamanism call the deity Kougai, the chief of the malevolent spirits Schaitan., their idols Talons, and their priests Kams or Kamaks “They assure us,” says Fischer, ” that they worship but one God. When they pray they turn towards the east: their prayer consists of a short ejaculation, beseeching the Almighty to preserve them from death.” Their temples or keremets, which they call Taiga, consist only of four stakes driven into the ground, at the distance of a couple of yards from each other. In this place they sacrifice, at least once a year, a horse. They devour the flesh of the animal, and, after stuffing the skin, they place branches of trees in its mouth, and leave it in the Talga with its head turned towards the east. They also sacrifice hares and ermine. Formerly, the Teleutans either burned the bodies of their dead, or hung them upon trees, where they were left to putrefy. Their infants are still served in the same manner; but the bodies of their adults are thrown into the ground in miserable coffins.