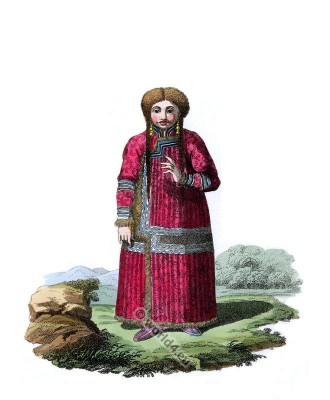 THE Katschintzian females wear trowsers, and short boots in the shape of stockings, made of skin, and ornamented with embroidery. Their under garment is long, and is either of thin China cotton, or of silk; the outer one is of fine cloth, skin, or silk; it is a sort of robe with long skirts, and is made to fold over in the front. Their holiday dresses are decorated with embroidery, elegantly worked, and the edges are trimmed with rich fur, or with different coloured stuff. The hair is divided into two large braids, which descend the bosom. They wear rings; to which are added ear-drops, and pieces of different coloured ribbon. The head-dress consists of a flat bonnet, trimmed with fur, and projecting beyond the head. The unmarried females divide their hair into a greater number of braids than the married ones; they generally wear nine of these braids, each of which is decorated with a ribbon and various other ornaments. The daughters of the richer families wear a girdle over the under garment, and leave the upper one open; so that the former may be seen, as well as their embroidered stockings, made in the shape of boots. (See Plate XXIII, which represents a Katschintzian Tartar Girl)
The Katschintzians deposit their dead in the earth with their clothes on, but without coffins ; the inside of the grave is lined with planks, in order that the mould may not touch them. Some household utensils are buried with the body, and a quantity of meal, with water, is left upon the grave. At the expiration of a twelvemonth, the relatives and friends of the deceased revisit his tomb: they commence with a long panegyric on his virtues; they drink to his memory; but, by the aid of strong liquors, they soon banish the remembrance of their sorrow, and what began in tears generally ends in drunkenness.
In the country of the Katschintzians, numerous vestiges of antiquity have been discovered, together with several rich tombs, enclosing the most finished productions of industry. But these monuments of arts, these re-mains of opulent pride, cannot be attributed to their forefathers. The country, at present inhabited by hordes of wandering Tartars, must formerly have been the residence of artisans, whose vices were probably’ punished by barbarians, and of whom there now remains not the smallest remembrance.

Note:  A Female Tatar of Tomsk.