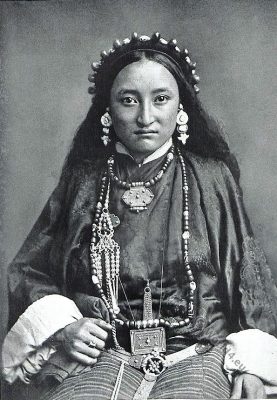 A Lama woman from the Tibetan frontier: Mongoloid Type.


A Lama woman. From a Photograph by Messrs. Johnston and Hoffmann, Calcutta.

Lama or La-ma is a Tibetan word meaning “Superior One,” and was formerly restricted to the head of a monastery. It is now strictly applicable only to abbots and to the higher class of Buddhist monks, though out of courtesy it is given to almost all monks and priests, and on the British frontier it is extended to a sept of the Gurung tribe. In many families the first-born son is often dedicated to the profession of religion. As in the case of the lady in the illustration, to use the words of Lt.-Col. Waddell: ” Their inveterate craving for material protection against malignant gods and demons has caused them to pin their faith on charms and amulets, which are to be seen everywhere dangling from the dress of every man, woman, and child.”

Source: The people of India: being an attempt to trace the progress of the national mind in its various aspects, as reflected in the nation’s literature from the earliest times to the present day; with copious extracts from the best writers by Herbert H. Risley. Published by William Crooke. Calcutta 1915.