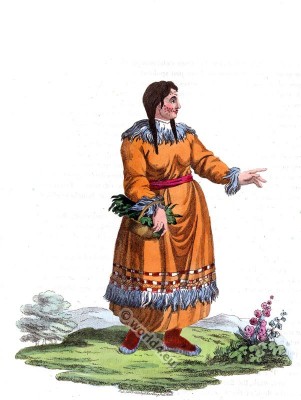 THE stationary Koriaks are far from entertaining the jealous sentiments of their neighbors, of whom we have just spoken: on the contrary, they feel a degree of pride whenever their wives attract the attention of strangers; and, with that view, will encourage them to pay the greatest attention to the decoration of their persons. They are fond of seeing them dress in their best apparel and paint their countenances with white and red, that they may the more effectually captivate their visitors. The stranger received into their hut, would be wanting in the duties of humanity, and even of common civility, if he were to reject the favors of their wives and daughters. Nay, they will present them to him, and retire from the hut, in order to leave them more at liberty: but if, upon returning, they find that the stranger has not availed himself of their generous offers, he is considered guilty of an insult, which can only be expiated in the blood of the offender. For a particular account of this singular custom, see the works of Kracheninnikof Georgi, and Midler.
Little is known with regard to the religion of the wandering Koriaks. Kracheninnikof had the curiosity to interrogate a Koryak, whom, from his being one of the richest men in the country, he imagined to be one of their chiefs; but he appeared to have no notions of’ a Supreme Being. The stationary Koriaks acknowledge the Koutkhou of the Kamtschadales to be the chief deity. They have the same expiatory festival as that people, and celebrate it at the same period. It continues a month: and, during the whole of this time, they neither leave their huts, perform any labour, nor receive visits.
Their shamans, or sorcerers, are their only physicians; and the remedies they employ consist solely of foolish delusions, unintelligible speeches, and the magical sound of their tambour. When in spite of the grimaces and witchcraft of the shaman, the patient expires, he is dressed in his finest apparel, placed on a sledge drawn by his favorite deer, and conducted to the pile which has been prepared for the purpose of reducing his body to ashes. The deceased is laid upon it, together with his arms, knife, hatchet, &c.; and, while the flames arc devouring the dead body, the attendants feast upon the flesh of the rein-deer, and what remains is thrown into the fire, as a sacrifice to the manes of their departed friend.

Note:  A Female Kyrgyz . The Costume of the Empire of Russia.