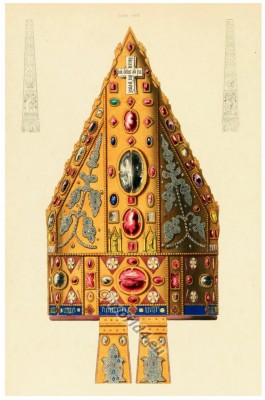 Dresses and Decorations of the Middle Ages by Henry Shaw 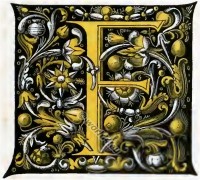 FROM a curious passage in the ancient “Ceremoniale” of the catholic Bishops, it appears that each prelate was expected to possess three different mitres, the precious (or best) mitre (pretiosa), formed of plates of gold or silver, adorned with gems and precious stones; the mitre of orfrais (auriphrygiata), also ornamented, but much less richly, and without the plates of gold or silver; and the simple mitre (simplex), without any rich ornament to distinguish it.
The superb mitre, of which we give an engraving, and which was first described by Dr. Milner in the seventeenth volume of the Archaeologia, answers to the description of the first of these classes, and was the one used by the bishop of Limerick, in Ireland, on occasions of great ceremony. At the time Dr. Milner examined it, it was preserved, along with an equally handsome episcopal crosier belonging to the same see, in the possession of a private gentleman. Its date is fixed by the following inscription round the rim: Cornelius O’Dea Episcopus Limeriecensis Anno Domini Milli… .

From the space occupied by the part of the inscription erased, and the known period of O’Deagh’s pontificate (Cornelius O’Dea, Archdeacon of Killaloe, was appointed Bishop of Limerick in the year 1400.), there can be no doubt that this date is 1408. Another inscription, in a small compartment, has preserved the name of the maker: Thomas O’Carryd, artifex faciens.

The body of this mitre, both before and behind, consists of thin silver laminae gilt, and adorned with flowers composed of an infinite number of small pearls. The borders and ornamental pannel or style down the middle, on both sides, is of the same substance, but thicker, being worked into mouldings, vine-leaves, &c, and enriched with enchased crystals, pearls, garnets, emeralds, amethysts, and other precious stones, several of which are of a very large size. Near the apex or point of the mitre in front is the following inscription, disposed in the form of a cross, and covered with a crystal of the same shape: Hoc signum cruds erit in coelo.

The infulae, or pendent ornaments, which hung down the back of the bishop, are altogether twenty-one inches long. They had been accidentally detached from the mitre, but were preserved along with it. They likewise consist for the most part of silver plates, gilt, and in like manner ornamented with innumerable small pearls, disposed in the form of leaves and flowers. On the lower part of them are embossed elegant niches, or tabernacles, one of which contains the figure of the angel Gabriel (with the usual label), the other the Virgin Mary. They terminate in a rich gold fringe. The back of the mitre is exhibited in the engraving, in order to show these vita, and the manner in which they are attached to the mitre. The back and front of the mitre itself, as far as regards the ornaments, are exact counterparts of each other.

It has been supposed that the episcopal mitre, in its present form, open and double pointed, was not introduced before the ninth or tenth century; and even then it seems to have been much lower in shape than at a later period. In the earlier drawings in MSS. the mitre is represented as very short. The mitre of William of Wykeham, of the fourteenth century, is ten inches in height; the Limerick Mitre measures thirteen; in the sixteenth century the height had been increased to eighteen inches. In the eleventh century the popes began to grant to abbots and priors the privilege of wearing the mitre. At a somewhat later period a regulation was made that the mitred abbots, who were exempt from episcopal jurisdiction, should be restrained to the second class of mitre (mentioned above), and that the non-exempt abbots and priors should be allowed to use only the third class or simple mitre. It does not, however, seem certain that this decree was always strictly observed.

The initial letter on the preceding page is taken from a manuscript of the fifteenth century in the British Museum, MS. Burney, No. 175, containing a copy of the Noctes Atticæ of Aulus Gellius, written between the years 1479 and 1494.